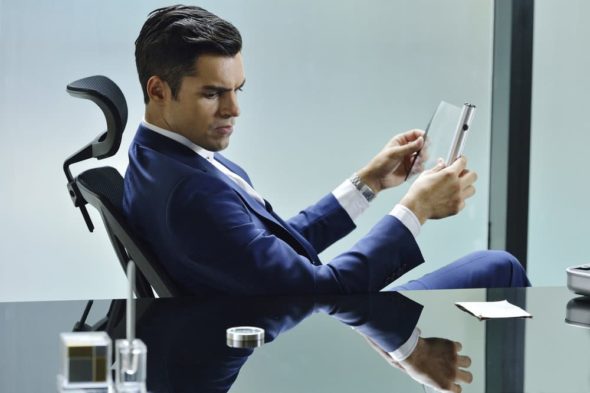 TV show description:
This futuristic thriller TV series takes place in the year 2074, in a world where corporations have unlimited power. The world is in chaos thanks to climate change and other crises. As governments fell, powerful corporations took control. As a result, the haves and the have-nots find themselves living in two very different environments — the Green and Red Zones.

The story centers on Ben Larson (Sean Teale), a young executive for Spiga Biotech which is the world’s largest corporation. He works for Elizabeth (Julia Ormond), the estranged mother of his wife, Laura (Allison Miller).

However, Ben is not who he appears to be. He’s actually a sleeper agent whose real name is Aaron. He’s become embedded in the company by Terrence (Ian Tracey), a shadowy figure who wields power in the Red Zones.

One of Aaron’s objectives is to locate Iliana, the sister of Theo (Eddie Ramos), another agent of Terrence. Aaron locates her in an executive club for sex slaves that service Spiga executives. He resolves to work his way up to a senior position in order to rescue her.

After framing his boss, Chad (David Hewlett), for stealing classified information, Aaron works on getting promoted while doing his best to avoid suspicion of the officers under Julian Morse (Dennis Haysbert), Spiga’s Head of Security.

Series Finale:
Episode #10 – Golden Parachute
Ben is being held captive by an Inazagi commando team, with their leader Tobias demanding he give up the Everclear program. Ben refuses to hand over company secrets … even when Tobias holds a gun to Laura’s head, which leads to her brains being splattered all over her husband.

Don’t worry … it was actually all a simulation, a test to measure Ben’s loyalty to SPIGA. Elizabeth is pleased with his performance (even though it involved her own daughter being murdered — all make-believe, sure, but still) and now Ben can truly join the 40th Floor as Senior VP of Counter Intelligence Tech.

Ben isn’t planning on staying in that position long, though – he wants out, and he’s taking Elena with him. Ben confronts Philip Brill, the Inazagi exec who inadvertently gave up the location of Sanjay Maraj, and offers a proposition: the Everclear program in exchange for the safe extraction of two people. Brill agrees.

Ben makes his first visit to Arcadia, where he and Elena retire to a private room. Ben is confused and heartbroken to find that Elena isn’t very happy to see him. In fact, she’s a bit appalled by all that he’s done to get to her, especially going so far as to get married to another woman. Ben leaves, still determined to win her over.

Elena’s got her own plans, though. She’s in secret cahoots with one of Arcadia’s maids, and The Maid sees Ben as the perfect pawn with which to enact their vengeance against all the suits that have exploited them over the years. The Maid encourages Elena to humor the poor lovesick fool — they could certainly use him.

Back at home, Ben receives a surprise visit from Hendrick, who’s now on the run. The tech Hazel found under the bed contained information about Hendrick’s past; Hazel took it to school and her teacher confiscated it, and now it’s only a matter of time before the authorities investigate. Hendrick is heartbroken to leave Hazel but he can’t take her over the wall with him, and after Ben assures him (not very convincingly) that SPIGA will find a good home for her, Hendrick says goodbye.

After Hendrick disappears into the night, Ben calls Brill and tells him they have to move up the extraction. Later, when Ben meets with Brill at the rendezvous point, Brill is surprised to see that the two people he’s extracting aren’t Ben and Elena but Hendrick and Hazel! Is Ben on the road to some sort of moral redemption?

After Hendrick and Hazel are safely extracted, Ben visits Elena at Arcadia. Ben apologizes for giving up their chance to escape, but now that he’s on the 40th Floor, he’ll have access to even more tech and secrets that he can trade with the competition in exchange for safe passage. Elena is much warmer and friendlier, assuring Ben that he’ll find the right time and circumstances with which to arrange their exodus. They kiss and make love for the first time in six years.

Meanwhile, out in the Red Zone, Julian and his SPIGA troops have tracked down the crazed Chad Peterson, whom they plan to bring in for questioning regarding the murder of Roger Caplan. However, Julian’s hopes of finding out the truth are dashed when Chad, hallucinating in his madness, mistakes one of the troops for Ben Larson and charges him, which prompts the squad to open fire. Good night, Mr. Peterson.

Elsewhere in the Red Zone, Laura has discovered the thief who’s been stealing the nano-sutures and other supplies: Gabe, the young man whose life she saved when she rebooted his mechanical heart. She locks Gabe in the supply closet and tells Goran that she’s found the culprit, though Goran expects Laura to take care of this matter on her own, encouraging her to never show weakness out here in the Red Zone. Laura, bound and determined to make the clinic work, takes this to heart and has Gabe’s hand chopped off — a warning to any others who might try to steal from her.

That message applies to Laura’s own mother, too. She pays a surprise visit to Elizabeth at her office, telling her that Elizabeth will shut down her clinic over her dead body. Elizabeth is impressed … and perhaps even proud.

Meanwhile, Theo is starting to become seduced by the spiritual philosophies of Mira, the member of a local convent and the sister of the man Theo killed in his last cage match. Mira preaches of the transcendence that comes with letting go of desire, and from there being free of pain. She calls it ‘non-existence’ … which Theo interprets as death.

Theo and Terrence arrive via limo to their big Green Zone fight being held at a lush mansion filled with all sorts of suits and celebrities. Theo refuses a dose of Rage powder and faces his opponent in a shallow pool. It takes a lot to make Theo stay down, though when he finally does, it looks like he might just allow himself to drown in the serene water … until an enraged Terrence pulls him back up.

Terrence prepares to kill Theo for throwing the match, which doesn’t seem to bother Theo in the least. His attitude suddenly changes when Terrence reveals that he’ll also be killing Theo’s lover, Anthony. Theo begs for Anthony’s life, telling Terrence that he’ll give him a line into SPIGA in return: Ben Larson. Terrence, ever the business man, is intrigued … and spares both Theo and Anthony.

Season 1 of Incorporated ends with Ben and Laura moving into their fancy new house (which used to belong to the unfortunate Petersons); Terrence mulling over a photo of Ben; Elena and The Maid exchanging a conspiratorial look at Arcadia; and Laura getting confirmation that she’s pregnant.

Ben looks out the window of his 40th floor office, joining us as we wonder what comes next. (Courtest Syfy.)
First aired: January 25, 2017

What do you think? Do you like the Incorporated TV show on Syfy? Do you think it should have been cancelled or renewed for a second season?

WHY??????? I loved this show, is was a great depiction of what our future will be under the current administration.

RENEW… This is a well done dystopian view of a potential future for our world. It is thought provoking and fascinating in its detail. Please stop canceling intelligent scifi series before they can be fully established. Have a little ‘faith.’

Sad that it isn’t a chance to let this story grow. Whole other POVs to discover.

Excellent hypothetical account of where we are going. Renew, renew, renew.

Excellent Show! It’s in my favorites list along with the 100, expanse, the magicians etc.. It absolutely needs renewed for another several seasons.

This is a must-watch show. Renew!

I absolutely LOVE this show! I’m not a syfy fan but this is a really good show. Fingers crossed there will continue show!

renew. it is absolutely brilliant.this show is gold.

Yes definitely renew! I’ve never been a syfy channel viewer until I saw the clip for this show, and now I am going to keep an eye out for there original programming because of how good this show was! If they renew I will stay a syfy viewer for sure.

Definitely should keep this show on. It is a view of a too possible future, and we need to take pains not to go in this direction.

Great !!
Should be renewed

This is an excellent show that deserves the right to find its footing and become a great piece of SIFI.

Absolutely not. This is another TYPICAL SYFY show whose live ratings average will finish below a 0.20 They have already renewed 6 shows with ratings under a 0.20(which is awful) and we still haven’t heard about Afterlife yet. It is unlikely any of these shows that were renewed will have much better ratings next season. A total overhaul of SYFY is in order, and the new person in charge has to know that constant Failure at this level is unacceptable.