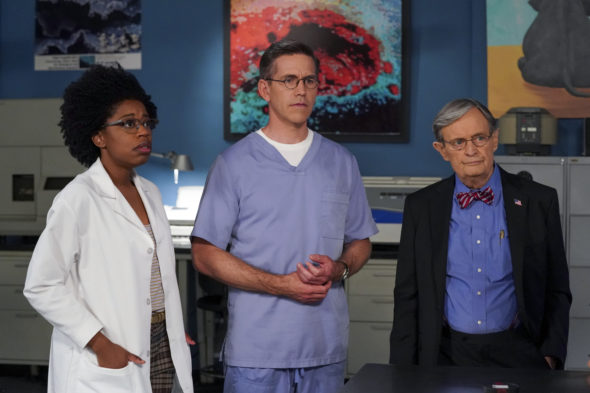 Things won’t get boring for this crew in the 20th season of the NCIS TV show on CBS. As we all know, Nielsen ratings typically play a big role in determining whether a TV show like NCIS is cancelled or renewed for season 21. Unfortunately, most of us do not live in Nielsen households. Because many viewers feel frustrated when their viewing habits and opinions aren’t considered, we invite you to rate all of the 20th season episodes of NCIS here.

What do you think? Which season 20 episodes of the NCIS TV series do you rate as wonderful, terrible, or somewhere between? Do you think that NCIS should be cancelled or renewed for a 21st season on CBS?

I agree Gary Cole could never fill Gibb’s shoes. But love the others. Still watching. Have Gibbs on reruns.

While I’m disappointed when my favorites LJG, Tony and Ziva left the shows, NCIS still the best show on TV.

Yes, LJT was the best, but Parker and the rest of the cast still provide one of the best hours of television! Keep it running please!

I greatly miss LJG and Tony/Ziva! They added an element of humor and romance vs all horrific viewing like CSI’s.

Why are they still citing Gibbs’ rules? Are they happy winding up us viewers with our loss of LJ?
Midnight Caller ain’t doing it for me.
Will this show receive the Katrina Law kiss of death too? It happened with Arrow and Hawai’i Five-0 or hasn’t anyone noticed?
A bit like a football team here in England, buying player’s that have just been relegated at their former clubs, planting the seed of defeat, as it happened with Norwich City last season.

What are you talking about? Her character entered Arrow in Season 2.

Gary Cole ain’t cutting it. Harmon was truly the hub this show turned on. Like any athlete losing the edge, maybe it’s time for NCIS to retire.

NCIS is a great show.

So glad the new season started.