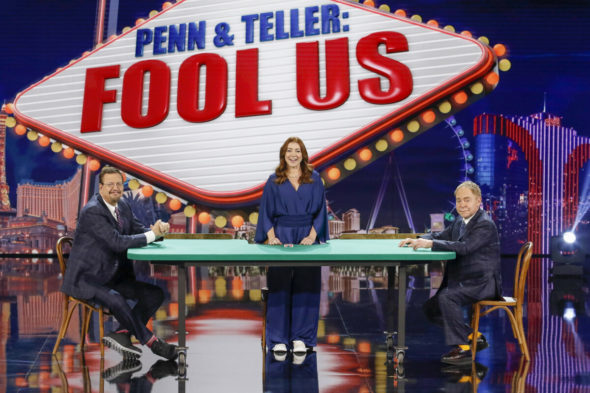 Now that The CW is owned by Nexstar, could this show disappear? Has the Penn & Teller: Fool Us TV show been cancelled or renewed for a 10th season on The CW? The television vulture is watching all the latest cancellation and renewal news, so this page is the place to track the status of Penn & Teller: Fool Us, season 10. Bookmark it, or subscribe for the latest updates. Remember, the television vulture is watching your shows. Are you?

A magic competition series airing on The CW television network, the Penn & Teller: Fool Us TV show is hosted by Alyson Hannigan and is judged by comedic illusionists Penn Jillette and Teller. In each episode, aspiring magicians are invited to perform their best tricks to try and fool the world-famous team. Anyone who succeeds wins the right to perform with Penn and Teller in their celebrated show at the Rio Hotel & Casino in Las Vegas. The live studio audience and the TV audience watch along with Penn & Teller as they try to figure out the secrets. The master magicians see the trick only once and have to try to immediately figure out how it was done. The live studio audience knows there are no camera tricks, secret edits, or helpful camera cuts — just real magic. Magicians in season nine include Jon Mobley, The Van Hargen Twins, Axel Adlerm, Chris Canfield, Theron Christensen, Jaana Felicitas, Benjamin Barnes, Brian Curry, Yann Yuro, Helen Coghlan, Jason Michaels, and Alexander Boyce.

The ninth season of Penn & Teller: Fool Us averages a 0.07 rating in the 18-49 demographic and 679,000 viewers. Compared to season eight, that’s down by 28% in the demo and down by 9% in viewership in the live+same day ratings (includes DVR playback through 3:00 AM). While these numbers don’t include further delayed or streaming viewing, they are a very good indicator of how a show is performing, especially when compared to others on the same channel. There can be other economic factors involved in a show’s fate, but typically the higher-rated series are renewed and the lower-rated ones are cancelled. Find out how Penn & Teller: Fool Us stacks up against other The CW TV shows.

What do you think? Do you hope that the Penn & Teller: Fool Us TV show will be renewed for a 10th season? How would you feel if The CW cancelled this TV series, instead?