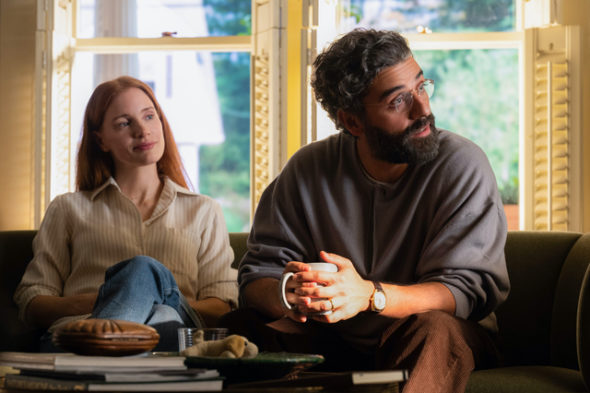 What will we learn about Mira and Jonathan and ourselves? Has the Scenes from a Marriage TV show been cancelled or renewed for a second season on HBO? The television vulture is watching all the latest cancellation and renewal news, so this page is the place to track the status of Scenes from a Marriage, season two. Bookmark it, or subscribe for the latest updates. Remember, the television vulture is watching your shows. Are you?

Airing on the HBO cable channel, the Scenes from a Marriage TV show is based on the 1973 Swedish mini-series by Ingmar Bergman. This version stars Oscar Isaac and Jessica Chastain with Sunita Mani, Nicole Beharie, Corey Stoll, and Tovah Feldshuh in supporting roles. A re-examination of the dilemmas probed by the original, the series explores love, hatred, desire, monogamy, marriage, and divorce through the lens of a contemporary American couple. Mira (Chastain) is a confident, ambitious tech executive left unfulfilled by her marriage while Jonathan (Isaac) is a cerebral and accommodating philosophy professor who is desperate to keep their relationship intact.

The first season of Scenes from a Marriage averaged a 0.03 rating in the 18-49 demographic and 164,000 viewers in the live+same day ratings (including DVR playback through 3:00 AM). While these numbers don’t include further delayed or streaming viewing, they are a very good indicator of how a show is performing, especially when compared to others on the same channel. There can be other economic factors involved in a show’s fate, but typically the higher-rated series are renewed and the lower-rated ones are cancelled. Find out how Scenes from a Marriage stacks up against other HBO TV shows.

We don’t have to wonder if HBO will cancel or renew Scenes from a Marriage since it appears to be a mini-series with a set ending. That being said, if the show were successful enough, perhaps HBO might be interested in making this an anthology series, with a different cast and story each season. The cable channel could also commission a follow-up ala Saraband, Bergman’s sequel that reunited the mini-series stars 40 years later. As it is, the ratings for Scenes from a Marriage are quite low so I think this series will truly end with its five-episode run. I’ll update this page with breaking developments. Subscribe for free alerts on Scenes from a Marriage cancellation or renewal news.

What do you think? Do you hope that the Scenes from a Marriage TV show will be renewed for a second season, possibly with a new cast and/or story?