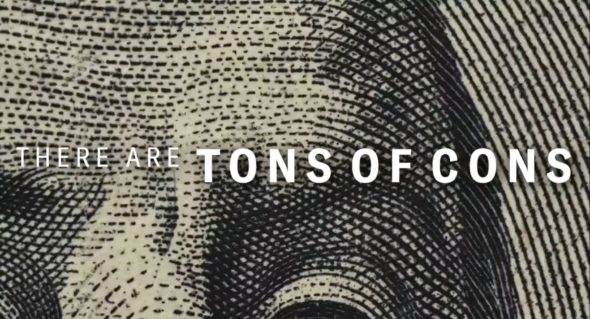 ABC News brings us tales of duplicity, broken promises, and greed. Has the The Con TV show been cancelled or renewed for a third season? The television vulture is watching all the latest cancellation and renewal news, so this page is the place to track the status of The Con, season three. Bookmark it, or subscribe for the latest updates. Remember, the television vulture is watching your shows. Are you?

Airing on the ABC television network, The Con TV series is narrated by Whoopi Goldberg and features podcaster Laci Mosely offering her expert insights. The show explores the troubling tales of people taken in by claims and promises that proved too good to be true. It delves into a myriad of topics, from identity fraud and misleading romance to the high-profile college admission scandal and Fyre Festival. The reports reveal how the victims were fooled and the cost of their false trust — both emotionally and financially. Episodes feature interviews with key people caught up in the scams, including victims and eyewitnesses, and, in some cases, law enforcement and the perpetrators themselves.

The second season of The Con averages a 0.25 rating in the 18-49 demographic and 2.09 million viewers in the live+same day ratings (includes all DVR playback through 3:00 AM). Compared to season one, that’s down by 21% in the demo and up by 3% in viewership. While these numbers don’t include further delayed or streaming viewing, they are a very good indicator of how a show is performing, especially when compared to others on the same channel. Though other economic factors are involved, the higher-rated shows usually get renewed and the lower-rated ones get cancelled. Find out how The Con stacks up against other ABC TV shows.

Will ABC cancel or renew The Con for season three? This show is relatively inexpensive to produce but draws low ratings. The network’s decisions to renew or cancel docu-series like this appear to be based on factors beyond viewership. I’m leaning toward a renewal (since The Con made it to a second season) but it’s really a toss-up. I’ll update this page with breaking developments. Subscribe for free alerts on The Con cancellation or renewal news.

What do you think? Do you hope that the The Con TV show will be renewed for a third season? How would you feel if ABC cancelled this TV series, instead?