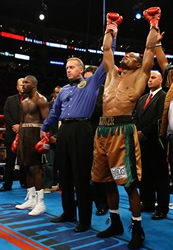 The Contender boxing competition series started its run on NBC back on March 7, 2005. Produced by Mark Burnett and hosted by Rocky veteran Sylvester Stallone and boxer/trainer Sugar Ray Leonard, the reality show followed 16 middle-weights as they competed for a million dollar prize. The show garnered low-ratings and viewership wasn’t likely helped by the suicide of one of the eliminated competitors. the series was cancelled after one season.

A few months later, ESPN picked up the series. The cable channel dropped most of the show’s extraneous elements and focused on the boxer training and matches. The Contender has aired on ESPN for two seasons but now the sports channel says that they’re finished with it as well.

ESPN vice president of series development and production Ron Wechsler tells ESPN.com, “It was a hard decision to make. We were talking to [promoter Tournament of Contenders] about a renewal but we couldn’t come to terms.” He added, “We have the greatest respect for TOC, Jeff Wald, Mark Burnett Productions and DreamWorks and we stand by the quality of the show. But it’s a very competitive marketplace and the ratings weren’t as strong as they were the year prior.”

Wald, one of the show’s executive producers, says that the boxing series isn’t down for the count just yet. He notes, “We’re sorry it didn’t work out at ESPN, but we’re in the process of making another deal.” He wouldn’t say where the show might land but hinted, “Hopefully, the deal we are working on will be closed in the next few days. The Contender is the show that will not die.” Both HBO and Showtime have reportedly both indicated that they’re not interested.

The executive producer feels that ESPN is to blame for any ratings issues, saying, “The show is a success with the fans and it became that without much marketing or promotion. With the exception of Ron, who was in our corner from day one, the show was mishandled right from the beginning.” Stay tuned!

I’ve been watching Contender Asia Series. But the original Contender Boxing Series is unbeatable and should reall y say it is the MOTHER OF ALL REALITY SHOWS> The show has inspired me to get coaching for the boxing classes. So it is a dis grace that TV channels juz wok on the sample polls TV ratings where by we here are all loving it to the core. SO don’t stop airing the program.

Me Brad Goodman wood like to be on the contendre.

The Contender TV show is an excellent TV show and I hope you bring it back, and even better I hope that you make a Contender series for women boxers. Because we don’t always get a fair chance at this sport and most times we get pushed to the back burner. Even though women boxers probably work harder then anyone to get the recognition, and the same pay as men boxers do, we still are not accepted. But all in all I HOPE YOU BRING BACK! “The Contender”.
Sincerely,
K-Unique

Yea bring back the contender. this show was not only epic but great as well! We need more boxing, please bring it back!

MAN I THOUGHT THE CONTENDER WAS ONE OF THE BEST SHOWS ON TV. I COULDNT WAIT UNTIL THE NEXT WEEK. ME AND A FRIEND MADE A NIGHT OF IT. I CANT BELIEVE THAT IT DOESNT HAVE A SECURE PLACE ON A MAJOR NETWORK. TAKE A LOOK AT ALL THIS JUNK ON THE TV TOO.

Martine, i have the contendor seasons one, two and three on DVD. Recorded from the original airing. If your interested we can work something out. Contact me at kyle_jonston@hotmail.com

Does anyone know where to find the Contender series on dvd or vhs. Please let me know. Thanks

Let me know the date on which we begin the 2008 Contender Series. This is a must have for all of my friends.

Sign-me up for any email notifications.

i love the contender. heard that it will be pick up by Versus network.

I been a Contender fan since you put it on NBC. I saw the last one last year on ESPN 2007. I been trying Steven Spielberg to cast the next Indiana Jones for the last 10 years and kept emailing him and buggin him. And he finally responded to do one last movie of Indy. Now, its time to keep the Contender back again. It was so successful last yea and excited and kept me off my chair and bed. This is the most best shows of all shows. By the way, music is great with it. So, please bring… Read more »

I along with many friends love the show. As an athlete it is one of the most heart felt shows I’ve ever seen, and I hate reality shows. I may be the biggest Rocky fan on the planet, every week is like a Rocky movie. I would love to buy the dvd boxset of every season. I also have been waiting for news on when the next season, please the punk rockers have their bs shows the Contender is by far the best reality show on TV hands down. If Ray and Sly view this message, I love em, and… Read more »