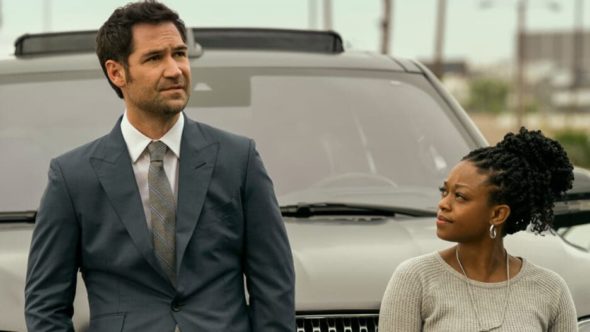 Mickey Haller will be back in the courtroom. Netflix has renewed The Lincoln Lawyer TV series for a second season of 10 episodes. A premiere date will be announced in the future.

A legal drama, The Lincoln Lawyer TV show was created by David E. Kelley and was based on The Brass Verdict novel by Michael Connelly. The first season stars Manuel Garcia-Rulfo, Neve Campbell, Becki Newton, Jazz Raycole, Angus Sampson, and Christopher Gorham. The series begins as attorney Mickey Haller (Garcia-Rulfo) is left to take over the firm after his former law partner is killed. This includes Haller stepping into a high-profile murder trial. With the biggest case he’s ever had to tackle out of the back seat of his Lincoln Town Car, Haller discovers there may be more at stake than he initially thought.

The first season of The Lincoln Lawyer premiered on May 13th. The series has consistently landed on the Netflix Global Top 10 list, with a cumulative 260.53 million hours viewed as of June 5, 2022, reaching the Top 10 in 90 countries.

Garcia-Rulfo, Campbell, Newton, Raycole, and Sampson have all been confirmed to be returning for season two. Additional returning players and casting will be announced in the future.

What do you think? Have you watched The Lincoln Lawyer TV show on Netflix? Are you glad to hear that this legal drama series has been renewed for a second season?

Looking forward to future episodes of the Lincoln Lawyer

Love the Lincoln Lawyer. Glad it’s renewed for another season.

Great to hear. My husband & I love the series.

I loved this series! So happy to hear it’s renewed.

Have watched it twice and I am a big fan. Also loved the movie.

This is an outstanding show/series Netflix don’t wait a year for second season. Then it’s Pride month Netflix is the only streaming show not to show new movies or series.

Good show it truly fooled me i thought he was guilty but the show made me think otherwise glad it got a season 2.

Matthew Caughey is the best actor made this into movie 2007 look so good never really saw it hopefully both shows and movies .

Good show can’t wait for the next season! It’s about time Netflix had something Worthwild