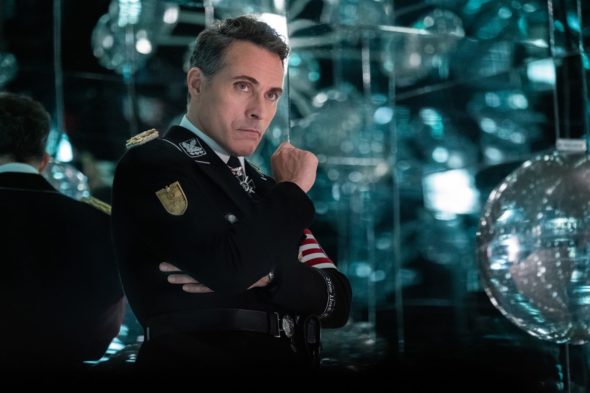 Can The Resistance win in the end? Has The Man in the High Castle TV show been cancelled? Renewed for a fifth season on Amazon? The television vulture is watching all the latest cancellation and renewal news, so this page is the place to track the status of The Man in the High Castle, season five. Bookmark it, or subscribe for the latest updates. Remember, the television vulture is watching your shows. Are you?

We don’t have to wonder if this show will be renewed for a fifth season since it was previously announced that season four is the end. Could it be revived in some form? Subscribe for free alerts on The Man in the High Castle cancellation or renewal news.

What do you think? Were you hoping that The Man in the High Castle TV show would be renewed for a fifth season? Is four seasons the right time to end the show or, should it have continued?

Of all shows to cancel – this is NOT one of them. One of the most intelligent, engrossing shows I’ve watched in a long time. For once, listen to the viewers! There is so much left to delve into and so many unanswered questions that beg to be answered.

‘The Man in the High Castle’ fiercely, fundamentally requires a 5th Season. True closure between Juliana Crain and Joe Blake would seal up this fascinating series as a real triumph of storytelling. We deserve reparation for a whole 4th season without Joe, in even a parallel universe sense. Also, Alexa Davalos is so superb she Scullyed her way as the impetus of the series, and SHE deserves this more than anyone!

Must have another season what happens with a the people coming from the other world. So much unanswered.

THERE NEEDS TO BE A SEASON 5 to show what happened next. TOO MANY UNANSWERED QUESTIONS FOR THE SERIES TO JUST END.

Amazon are idiots, if they don’t bring it back for another season.

Loved it,the possibilities are endless for a creative writing team to venture off into. With a multiverse concept imagine the number of worlds the show could visit. Reminds me of “Sliders”. I will be looking for more. Keep it coming.

I just became an Amazon prime member about a week ago when I found out I could get a big discount for being disabled. I ran across the man in the high castle Friday night and watched of 40 episodes ending last night. So what does that tell you I thought it was amazing! I would still like to see more and hope it comes out in some form it was very well done well acted and I miss John Smith LOL and Kido too

One of the best series. Please don’t let it end!

I will not give up on a Season 5, especially if those who watched it become vocal. The show was filled with an amazing cast and story line and most importantly, based on the final episode closed with a mountain of material left to be revealed.

The end needed at least one more episode, the whole idea of people just walking into a different world, like they knew or understood what was going on is illogical. Maybe even destroying the portal would have been better and easier to understand. This show certainly could use another season, no idea why they stopped in this one…

The story line ends with the demise of John Smith so season 4 should be the end of this most interesting series. Kudos to all the actors & actresses what a amazing cast, especially both Smiths, Juliana, Kido, Man in the high castle.

The most clever series cancelled. What a shame!

Leaving the show to end like it did was a little disappointing, the ending should have been longer. It was good, I just didn’t feel there was total closure. It was left open as to why there were people coming through the portal at the end, it was said they were from everywhere, but why were they showing up then? The show couldn’t been continued dealing with the multiverse of other worlds being explored.

Please continue The Man in the High Castle, what a well written and thought provoking show. It is also very original, and very unique. It makes you think and gives us alot to discuss after each show.