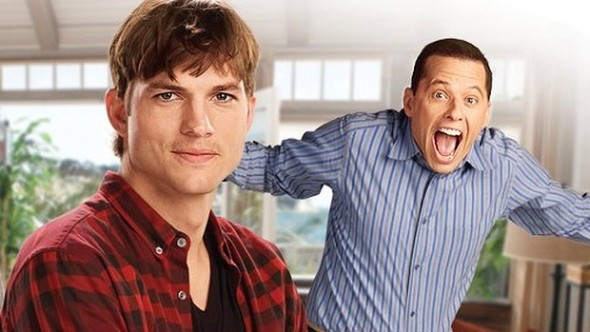 This morning, CBS entertainment president Nina Tassler announced that the upcoming 12th season of Two and a Half Men will be the show’s last season. Word is that the network is planning a season-long send-off and that the show’s co-creator/executive producer Chuck Lorre will cap the comedy with an event that spans the 12th year.

Many expected Two and a Half Men to be cancelled following the very public departure of Charlie Sheen but it continued to prosper for the network and its studio, Warner Bros, with the arrival of Ashton Kutcher. The show is very expensive to produce however and the ratings have been dipping over the past few years. It’s currently CBS’ fourth-highest rated comedy.

What do you think? Do you agree with the decision to end the show or do you think they should make a 13th season instead? Who would you like to see return in season 12?

Bring back Sheen and say it was a mistake he got hit by a train. It was someone else wearing a similar shirt or something. The show is good with Ashton but it was better with Sheen. He was two and a half men. After Jake left it was on the downturn. Bring him back for the final season also. Or just keep the shows running on TBS, TNT, etc. I would still watch it.

I never really watched the show till Kutcher was on it, but based on what I saw, I agreed with Angus for leaving and I did find the show to be filthy. Whatever happened to the family-friendly comedy? There is almost nothing I can watch with my 9 year old or teenager on tv and feel good about it. We love comedies, but there are just not really any for us to choose from due to all the sex and language.

I seem to be in the minority but I think Ashton revitalized the show and I still enjoy it and look forward to it every week. I for one will miss the show.

Can’t stand Kutcher – and he’s not funny. Show should have ended with Charlie.

No way. Should have cancelled show when Charlie left. Ashton Cutcher has absolutely no talent.

I agree. I miss Charlie and stopped watching.

I agree with the comment that the show was slowly fixing itself. New characters from both their lives keep it fresh. One more season isn’t enough, it will be sad to end it. I just hope the writers remember its a comedy for the final season and don’t go for emotional appeals.

It started going down hill the last season with Charlie Sheen, and it only got worse. It’s time has past.

i am glad it is only going to do one more season. this show makes no sense with ashton kutcher. i don`t even find it funny anymore. it was better with charlie sheen.

Oh no, it was just starting to get into gear. Season 11 was the best since Charlie left and it could only have gotten better with people like me who loved Charlie finally adjusting to Ashton.

People who think Ashton Kutcher is funny is questionable! I’ve never never met anyone as well as myself that found him funny EVER! And I don’t like that CAD known as Charlie Sheen. But when it comes to comedy, Sheen has it! I’ve never watched this show while it ran with Charlie Sheen only until he was booted, because it got so much darn publicity I started to watch the old reruns. I liked it so much that I even started to watch the newest episodes with Ashton and NO DICE! So I don’t know who’s being paid to troll… Read more »

lol plenty of people find him funny, otherwise he would have trouble finding jobs

Paul you are dreaming, Kutcher is absolutely horrible in this role, everything feels so forced and unnatural. As for the huge paycheck he is receiving what gives?

Thumbs up to seanshine you are on the money!

Of all of the movies that Kutcher’s been in, most of them lost money, big time!

I think that the only reason it wasn’t cancelled before this was the fact that Lorre was still trying to prove to Charlie that he was still the boss and that the show would continue to do well without him. But Lorre was dead wrong, IMO. It should have been cancelled it after the first show with no-talent Kutcher!

The first season after Charlie left was iffy. But it’s gotten really good with the new characters you’ve added. I think canceling is a mistake.

This show died when Charlie Sheen left, however Chuck Lorre said that there will be big surprises in season 12. Wait, could it be Charlie?

Now that’s one I would watch.

Show really sucks after charlie got kicked out and then jake seen from 1 seaon to 11 show sucks!!!! Now

Never watched the show before Charlie died. We think it better now after catching a few reruns of the ‘old’ cast. They reinvented it enough to make it ‘it’s own’ show. We’ll miss it, but at least we have another season to say “goodbye”.

I watched the show with Charlie and I continue to watch it with Ashton. The last 2 seasons with Charlie were pretty bad. I did not enjoy the much and the show was becoming repetitive. With Ashton joining the show it allowed for it to go in a new direction and the show feels completely fresh and new. Season 11 was fantastic. I am grateful we get 4 seasons of the revamped show. I know I’m alone when I say this season of Two and a Half Men has been funnier than this season of The Big Bang Theory was.

Another season is one too many.