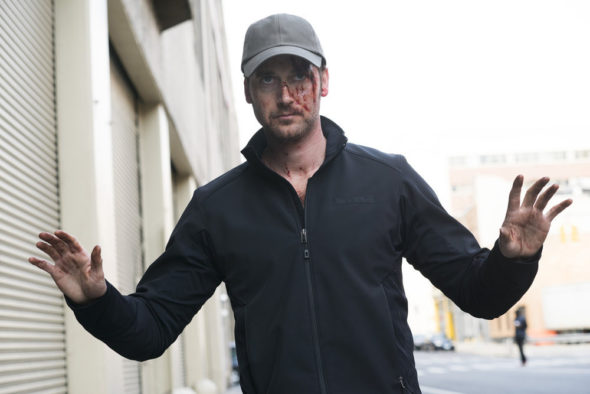 Although The Blacklist: Redemption was cancelled, we haven’t seen the last of Tom Keen. Ryan Eggold is returning to The Blacklist TV show, starring James Spader and Megan Boone.

Deadline reports Eggold will return to The Blacklist as a series regular, in the show’s fifth season on NBC.

What do you think? Did you watch The Blacklist: Redemption TV show? Do you prefer Eggold on the spin-off or the original series?

They could do a “wrap up” of the *redemption* story as a single/double Blacklist episode – guest starring Famke and Terry and the rest. Just like they introduce characters on a Blacklist episode, they should kill-off (or send them bye bye) on another episode.

Funny thing is I never watched the blacklist but I started watching the redemption first now I’m watching The blacklist and on season 4. Networks really need to find a new way to gather a shows popularity than just going off viewer #’s my generation watches everything online. I don’t watch anything on TV I download it all to watch whenever I want. Hope they finish the story up some how in the blacklist season 5.

Black list is great. Redemption was not. Glad Ryan will be returning.

You are so right!

this is classic NBC– give up on a show, just when it starts to show its’ enormous potential. I truly wanted more Terry O’ Quinn, and seeing him as a series regular. and I wonder what would have happened if Adrian Martinez, (Dumont), actually had a three dimensional character to work with. He was amazing in that movie,’focus,’ opposite Will Smith. Or Tawny Cypress. I never saw any real publicity for the show– nothing like ‘shades of blue’ gets. releasing this show when everyone is on vacation tells the viewer the network doesnt really believe in the show. I just… Read more »

I just want that he leaves the show ,because it is time to Lizzington pairing to be happened. Let Red his second chance. They love eachother very much. Red is not the bio dad and she killed her father when she was fourth. TB is about Red and Liza not Tommy Keen’s family.

Couldn’t agree with you more.

I enjoyed the show, but, I am glad he is going back too the Blacklist.

I enjoyed the show. But I am glad he is going back too the Blacklist.

Why does NBC leave us hanging with his mother and father? Now we have no idea of why the father was the criminal and the mother not. They could have renewed it for at least another season. Now how do you lace that up into the regular Blacklist?. Probably all forgotten? One thing I hate about any series is the inability for the story to have any conclusion…so you watched it for a year or the total series with no ending. It’s like you reading a book and someone tears it in half before you finish. Thanks NBC for being… Read more »

On The Blacklist. Love love the show….

I love him in both. Just happy he will still be part of Blacklist. He makes Blacklist more interesting

Yes, I’m glad he’ll be back on THE BLACKLIST, too. I tried to watch Redemption but just couldn’t get into it…. and his mother on that looked way too young for that part.

Would of had him at 20 years old in real life definitely not too young.

Glad to keep Blacklist, but sad to see Redemption go – liked both shows. Too bad we didn’t get a conclusion for Redemption.

Glad to keep Blacklist, but sad to see Redemption go – liked both shows. Too bad we didn’t get a conclusion for Redemption.

Nobody needs this abusive guy/character Tom Keen as the cancellation of the spin-off has shown … Maybe we get a Tom Keen conclusion – like previous conclusions – that would be fantastic! I’m sorry but I feel simply no sympathy for this character.
Let’s see if Lizzie still trusts this husband of hers or if something changes for the better. One can only hope that he will finally meet his Waterloo.

I wish they had given Redemption more time. But if it has to go, so be it as long as we get Tom Keen (Ryan) back with Megan and the baby. He is so watchable and adaptable. Fascinating. I actually thought Edi Gathegi was terrific as Solomon… evil personified. I would like them to add him to the Blacklist cast. But the others were so so and not very believable. I cannot stand the sight of Janssen. She’s just insulting. All told, it is GREAT that Ryan Eggold will slip back into Blacklist; I had expected he would go back… Read more »

I think Famke Janssen needs to be added to BLACLIST. It has James Spader & other good actors, but lacks any hot or outstanding actress.

Looks IS what matters in that world. Talent most of the time, but “hot actress” been mentioned a lot since reading comments here. Yes, I like looking at attractive male actors, but it’s not necessary all the time. For females it’s a must most of the time. Some men seem like they can’t watch a female on tv unless she’s hot. Go ahead people…and attack me for what I said even though it’s true. I won’t be reading it anyways. Nothing against Famke, but she looked skinner that usual to me especially her arms, but some guys like stick arms… Read more »