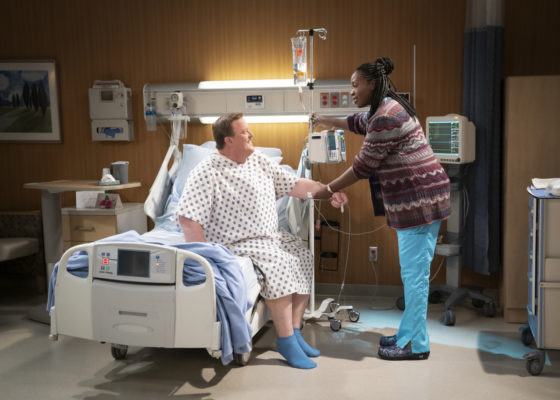 Have you fallen head over heels for the first season of the Bob ♥ Abishola TV show on CBS? As we all know, the Nielsen ratings typically play a big role in determining whether a TV show like Bob ♥ Abishola is cancelled or renewed for season two. Unfortunately, most of us do not live in Nielsen households. Because many viewers feel frustration when their viewing habits and opinions aren’t considered, we’d like to offer you the chance to rate all of the first season episodes of Bob ♥ Abishola here. *Status update below.

What do you think? Which first season episodes of the Bob ♥ Abishola TV series do you rate as wonderful, terrible, or somewhere between? Should CBS cancel or renew Bob ♥ Abishola for a second season? Don’t forget to vote, and share your thoughts, below.

I absolutely love this sweet, clever, and very funny show! The characters are great – all of them. Please don’t let them cancel! I look forward to this show every Monday night and there are way too many violent and sad shows on TV. The happy ones about love are what we need more of – and the Aunt and Uncle are so funny! Great writers!

We really enjoy this show: the plots, the cast, the writing: all funny and clever!

This show is unique. The characters are likable and
the aunt and uncle are hilarious.
I look forward to watching it and hope it is renewed!

I love the show. Yes I understand that it is wrong that a couple of the African characters say that American black individuals are “not as good” as Nigerians, but as long as they have someone (nurse character Abishola works with) straightening them out about that NOT being true, then I will still want to watch it. Billy Gardel’s character Bob also doesn’t accept any negativity/racist attitudes on the show either. This actually gives an opening for a sitcom to show that some Africans feel that way, and for another black American character to straighten them out on that. That… Read more »

This is a delightful show and I adore all of the characters. Please renew this show. I’m addicted, so have a heart and enable my habit. This is the thing that gets me through my Monday. Each Monday evening I can’t wait to see what happens next. I haven’t been this invested in a show for years.

I enjoyed the show. I found it refreshing with a positive but honest message. I could do without the canned laughter. I would like to see it renewed for a second season.

This is a delightful, warm and well needed show at this time when we all can see that we all have much in common. I love the humor because I am an American who married an African an lived as an expatriate there for 10 years. The show is well written and makes some very good points using humor.

#ADOS are in a fight for respect and rights that are owed to us & that our forefathers fought and died for. Here comes a show that depicts us in the most negative light. Telling lies about our community. Continuing to perpetuated stereotypes that bigots have labeled us with since our ancestors kidnapping to this country. These lies and stereotypes are being used against an oppressed people who are fighting for their life. The creators/writers make fun of us and use these stereotypes as an easy way to get rich off our ongoing plight. The show is not funny at… Read more »

These are people who came willingly recently, not through that awful time of your forbearers. So this is a whole different group of people with different influences. I am sorry this sorry the show makes you upset though. I don’t fault you for POV.

I think Bob ❤️ Abishola is different and comical. I believe it can go somewhere. I like the diversity. I would love to see it go a second season.

I didn’t think I would like this show let alone love it, But I was wrong this show stole my heart and it’s very good. I hope they keep this one on.

not sure about this show, pilot was just ok, will watch 3-4 more before making decision to continue watching….skeptical

Loved it refreshing loved chemistry between them. Her family funny yet real. Hope they give it a chance. A ten in my book

If the following episodes of Bob/Abishola are as funny as episode #1, we have a winner in the making. I really laughed out loud without the aid of a laugh track. Great show wit a wonderful cast. If you haven’t watched it, make sure you do.