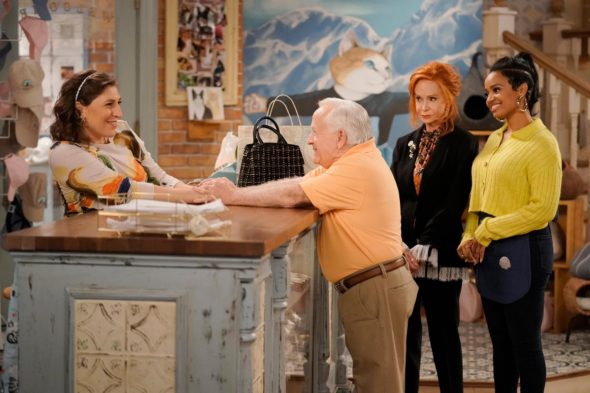 Production on the third season of Call Me Kat has been paused following the news of Leslie Jordan’s death. The actor died as the result of a single-car crash in Hollywood. He was 67. Mayim Bialik, Swoosie Kurtz, Kyla Pratt, Cheyenne Jackson, and Julian Gant also star in the FOX comedy about a woman named Kat (Bialik) who opens a cat cafe by using the money her parents saved for her wedding. Jordan starred on the FOX comedy series as Phil, a friend of Kat’s and her baker.

Bialik, the rest of the cast, and the producers of Call Me Kat released the following statement, per Deadline:

“There aren’t words to convey the loss we are experiencing as a cast and a Call Me Kat family. Leslie Jordan was larger than life. He was a Southern gentleman; tender, wise, naughty and hilarious. We got to know and love him at the height of his happiness and joy and it is inconceivable to imagine a world without our Leslie: the man who would spit on his contact lenses before putting them in his eyes, the man who had a story about every man in Hollywood and some of the women as well, the man who lived to make people laugh. We will be taking time to grieve and to celebrate the many gifts Leslie gave to us and to the entire world and we appreciate privacy at this time.”

FOX also released its own statement about Jordan’s passing:

“We are shocked and devastated by today’s tragic passing of Leslie Jordan. Leslie was far more than an Emmy Award winning comedic talent with whom we’ve laughed alongside for all these years. He was the kindest person you could ever imagine who simply lit up a room and brought pure joy and huge smiles to millions of people around the world. The truest of Southern Gentlemen, Leslie carried an infectious exuberance, indelible sense of humor and, throughout, gifted us with countless fond memories that will last forever. As we grieve this sad news, we also wish to extend our most profound sympathies to Leslie’s family, friends and fans, whom he held so dear.”

“Warner Bros. Television is devastated about the tragic and sudden loss of our dear friend Leslie Jordan. Leslie was an extraordinary person and talent. He brought joy to fans across the globe. Our thoughts are with his family, friends, and fans at this time.”

This Thursday’s episode of Call Me Kat will air as scheduled and will now include an in-Memorium.

What do you think? Are you sad to hear about Jordan’s death? What was your favorite role of the actor during his career?

Hated so much hearing of the death of such a wonderful actor. He brought us joy, laughs and happiness for not nearly enough years. He will definitely be missed by many many many people. My heart goes out to the cast of Call me Kat. I cannot imagine how lost they are and will be for some time to come. thoughts and prayer to them and his family.

Deeply saddened by the news of Leslie Jordan’s passing
What a great actor, so talented, who you just had to love, no choice! You just can’t help it…
I cannot put it in any other more touching words as “Fan of Leslie” below ♥
Rest in Peace Leslie

Please boost your ratings so funny love this show Miriam Bialik is the best lines look forward to seeing it every Thursday night sitcom. Leslie Jordan truly be missed on this sitcom. Rest In Peace my friend.

Sad news. He was the only really funny character on the show.

My heart is saddened at the loss of such a sweet and comedic person as Leslie Jordan. His role in Call Me Kat is funny, real and all around great. Prayers to his family, friends and fans. RIP Leslie. ❤️

So sad to hear of his tragic passing . Loved watching him he was so funny and joyous. Made me laugh out loud all of the time. Prayers to his family and friends.

Sadly we have lost another great actor an LGBTQ member a man who made everyone laugh. A man who also put God first not ashamed to do so or of who he was. We will Miss you deeply Leslie, to the crew we hope you find the strength to carry on. As the show is Wonderfully outstanding. Every member of the cast.
Try to keep on laughing knowing he would want you each to do. Leslie will be remembered forever in all his works and helping others.

Frankly, he was the only reason I watched. He was actually amusing and charming. Most of the “laughs” weren’t actually funny.

Evert time I watched Leslie Jordan or listened to him I got a good giggle! I always envied his friends for having him in their lives! He seemed like an Angel on Earth!

Now he’s a Angel. In Heaven

I was very sad to hear about his death.

By the way I’m not making a thing out of how many upvotes and downvotes my comments get, but I just have to ask. Why would you give a thumbs down to someone saying that they’re sad about a person dying?

I was thinking the same thing. Like how could someone give a thumbs down to that? It’s messed up. Leslie was also the most likeable person. I’m going to miss him!