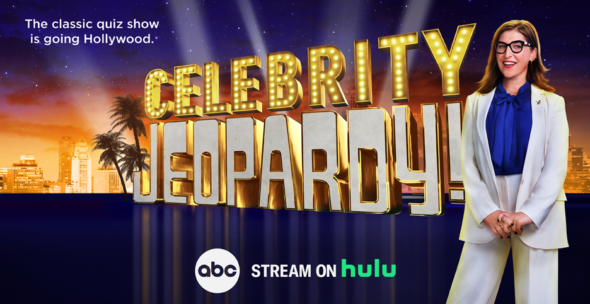 The syndicated version of the Jeopardy! TV show has been a staple in local markets for decades. Will a celebrity primetime version also be a big success and run for many years on ABC? Will Celebrity Jeopardy! be cancelled or renewed for season two? Stay tuned.

A trivia game show, the Celebrity Jeopardy! TV series is based on the long-running syndicated competition and is hosted by Mayim Bialik. In this version, three celebrity contestants compete in various rounds to win as much money as possible for their favorite charities. As always, players must respond to trivia clues in the form of a question. In this version, there are three initial rounds — the Jeopardy! round, the Double Jeopardy! round, and the Triple Jeopardy! round. The dollar values for each correct response grow as the difficulty increases and as the game progresses to the different rounds. The game finishes with a Final Jeopardy! round in which players can bet a portion or all of their accrued winnings in an attempt to increase their total and win the game. Contestants initially play in quarterfinal rounds, and the winners move on to the semifinals and possibly, the finals. Contestants in the first season include Simu Liu, Ego Nwodim, Andy Richter, Eddie Huang, Reggie Watts, Iliza Shlesinger, Constance Wu, Ike Barinholtz, and Jalen Rose.

What do you think? Do you like the Celebrity Jeopardy! TV series on ABC? Should it be cancelled or renewed for a second season?

It was not the host we didn’t care for she’s great along with Ken during the original,shows ..I am not the only one who agreed about it being dumbed down everyone I know agreed with that…it was the writers not the host .

I’m sorry I’ve watched jeopardy for years and I think they really dumbed it down the first night I answered all but 5 correctly , too easy plus all the clowning around a couple nights …in the past they had intelligent celebrities that took the show seriously …they had fun but didn’t act like idiots !

While the concept of a celebrity Jeopardy game is interesting, the reality of watching it with Mayim Bialik as host is not something we choose to do. We had already stopped watching regular Jeopardy whenever she’s hosting, and if Ken Jennings had not returned to host this fall, we would not be watching it at all. It’s unfortunate because we’ve been Jeopardy watchers (not just fans) since the 70’s. If Ms. Bialik returns to host regular Jeopardy in 2023, we will once again stop watching until Ken returns. And for those that say it shouldn’t matter who is hosting, I… Read more »

It was the host and she does just fine…I like that’s he and Ken both host gives variety …the questions were too,easy to be on jeopardy. They needed smarter celebrities who had fun but not so out of control ….last Sundays was the best harder questions but, smarter celebs , took it more serious