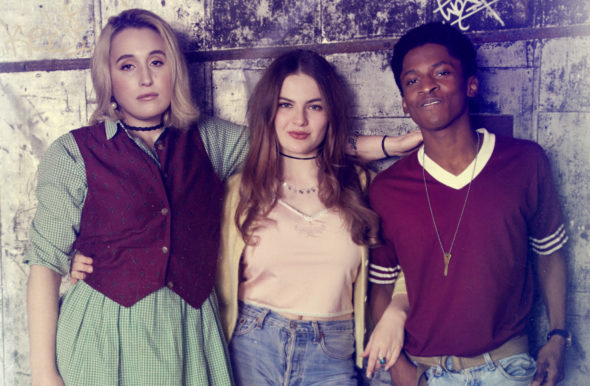 What really happened to Kate? Has the Cruel Summer TV show been cancelled or renewed for a second season on Freeform? The television vulture is watching all the latest cancellation and renewal news, so this page is the place to track the status of Cruel Summer, season two. Bookmark it, or subscribe for the latest updates. Remember, the television vulture is watching your shows. Are you?

Airing on the Freeform cable channel, the Cruel Summer TV show stars Olivia Holt, Chiara Aurelia, Michael Landes, Froy Gutierrez, Harley Quinn Smith, Allius Barnes, Blake Lee, and Brooklyn Sudano. The story follows two young women. Kate Wallis (Holt) is a popular girl with a charmed life who one day goes missing without a trace. Jeanette Turner (Aurelia) is the nerdy wannabe who is accused of being connected to Kate’s disappearance. All signs point to Jeanette’s guilt, but is Kate really who she seems to be? Set over three summers in the 1990s and told through shifting points of view, the series challenges perception and follows how one girl can go from being a sweet outlier to the most despised person in America. The episodes tell the story of each one and how the disappearance of Kate intersects with everyone’s lives.

The first season of Cruel Summer averaged a 0.11 rating in the 18-49 demographic and 267,000 viewers. Find out how Cruel Summer stacks up against other Freeform TV shows.

Will Freeform cancel or renew Cruel Summer for season two? The cable channel has very few scripted series on its schedule at this point so I think they really want this drama to succeed. I think that it will be renewed. I’ll update this page with breaking developments. Subscribe for free alerts on Cruel Summer cancellation or renewal news.

What do you think? Are you glad that the Cruel Summer TV show has been renewed for a second season? How would you feel if Freeform had cancelled this TV series, instead?

I hope they wrap it up. Like a mini series.