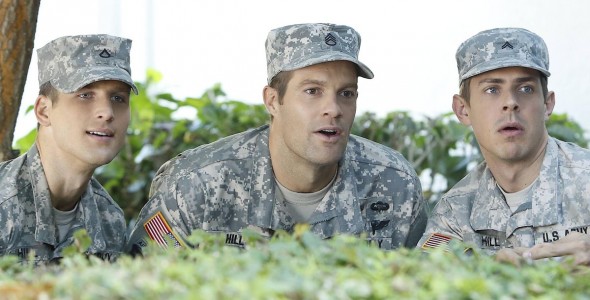 Earlier this evening, FOX renewed The Following, New Girl, and The Mindy Project — as well as newbie comedy Brooklyn Nine-Nine. Meanwhile, fellow freshman Dads is sure to be cancelled. But what about the network’s other new sitcom — Enlisted? Will it be cancelled or renewed?

Enlisted follows three brothers who find themselves all stationed at the same US Army base in Florida as part of a troupe of misfits. The sitcom’s cast includes Stults, Chris Lowell, Parker Young, Keith David, and Angelique Cabral.

The sitcom debuted in January, following Raising Hope, and drew a 0.7 rating in the 18-49 demographic with 2.41 million viewers. It was hardly a positive start — even for a Friday night show. The second episode dropped lower.

Then, FOX decided to switch Raising Hope’s and Enlisted’s timeslots, giving the latter a stronger lead-in with Bones. As a result, the sitcom’s audience grew by more than 60%, to a 1.1 in the demo with 3.23 million.

The ratings fell quite a bit the next week and then, understandably, the numbers dropped even lower opposite the Olympics coverage on NBC.

Even at its best, Enlisted hasn’t performed very well. Things certainly don’t look good but there’s still time for the sitcom to prove itself. How well the show performs in the upcoming weeks will likely determine its fate.

Unfortunately, starting next week, low-rated Rake will be Enlisted’s new lead-in and that’s not going to help matters.

But, what do you think? Do you like Enlisted? Do you think it should be cancelled or renewed for a second season?

I got my good bra on i will be on this site all night. Why in the world would you cancel this show. My neighbors and i are your number one fan club, we planned on dressing up as people from enlisted for halloween. I love all the comedy in the show, it gave me and my neighbors good ideas for inside jokes with each other. The best episode you have made was easily the first one it really got the people who watch it hooked. My neighbors and I all sit around on my couch on saterday morning to… Read more »

I LOVE THIS SHOW!!! I didn’t realize it existed till I stumbled across it a couple weeks ago, I have already watched ALL the episodes!! Fox would be stupid to cancel it!!!!

Love this show. We need another light hearted show, similar to MASH during this time.

I looove this show. It his smart heartfelt and hilarious. And it’s just nice for prime time television to show some love and respect towards the military. I am in the 18 to 49 demographic. FOX please do not take this away.

Funny and well written. The kind of show that’s smart enough to get adults laughing but easy enough to watch that you don’t need a pen and paper to follow each episode. I was skeptical at first but it had me hooked and I caught up on all the episodes on FOX’s website, sure hope that counts towards the “ratings”. KEEP IT!!

Love this show!! Its fully of wholesome brotherly conflict with just enough unique characters to keep it interesting. Needs to have a little more advertising so people get to know whats up!

AM
Reply to  Roger

Who ever is doing there advertising/marketing could put effort into promoting this show beyond the box. So many obvious low-hanging marcom opps exist and are not exploited. Sad. This show could really develop into the McHale’s Navy, Phill Silvers Show, Major Dad, CPO Sharkey, or Gomer Pyle USMC of this generation. This really can touch a nerve here and catch on if lite the right way. Come on guys, I know you have better marcom brains than this – if no budget, wing-it like a start-up!

Enlisted did something that I think a lot of new sitcoms do, and that’s to start off sort of campy. I mean literally start off, like within the first 5 minutes. I’ll be honest, it did turn me off at first, and I ignorantly rejected it. But I saw that a lot of people did that. And I like shows that most don’t. Shows like Arrested Development, Better off Ted, Don’t Trust the ***** in Apartment 23. I think I fall into a viewer category of the guy that goes around saying “I don’t really watch TV,” trying to pull… Read more »

This is a wonderful show and I hope they keep it. The warm relationships and funny banter are what really make this show. It reminds me of “Cheers” from the ’80s.
I hope the network remembers that After premiering on September 30, 1982, Cheers was nearly canceled during its first season when it ranked last in ratings for its premiere (74th out of 77 shows). Cheers, however, eventually became a highly rated television show in the United States, earning a top-ten rating during 8 of its 11 seasons, including one season at #1.

KEEP IT!!! It is not doing well because of the bad time slot. I have been DVRing it — one of our favorite shows!!! KEEP IT!!!! PLEEEEEEEEZE!!!!!

You need to advertise this show more — I saw plenty of advertisements prior to it airing – but then once it started…..nothing! C’mon! Better time slot! More ‘chatter’! Put it out there!

Intelligently written yet understandable and funny for all demographics. The lead actors are all fantastic!!

FOX is going to really regret canceling this show when it becomes some kind of cult netflix favorite. Best new tv show in years! and i watch a lotttt of tv

Renew this show! Its funny, original and the 3 brothers personalities really complement one another making for some funny antics. The flag football episode was hilarious!

RENEW IT! So hilarious! Please don’t cancel this awesome show!

KEEP IT!! I love this show it s so funny! They need to give it a chance they set it up to fail!