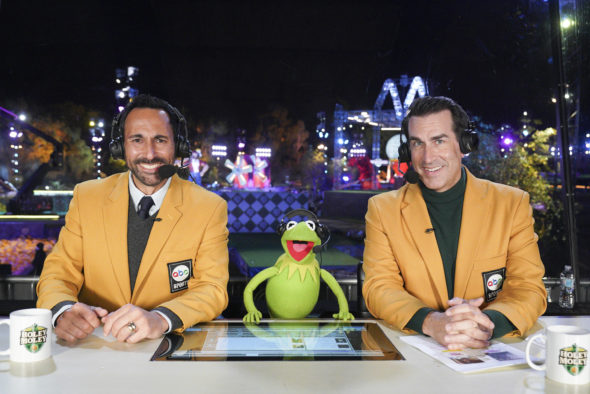 Can The Muppets sink the putt and bring more viewers? Has the Holey Moley TV show been cancelled or renewed for a fifth season on ABC? The television vulture is watching all the latest cancellation and renewal news, so this page is the place to track the status of Holey Moley, season five. Bookmark it, or subscribe for the latest updates. Remember, the television vulture is watching your shows. Are you?

Airing on the ABC television network, the Holey Moley TV show features self-proclaimed mini-golf lovers from around the country as they compete head-to-head through an obstacle-filled golf course. In each episode, contestants put their miniature golf and physical skills to the test as they face off in crazy challenges on the supersized course. The goal is to earn the golden putter, coveted plaid jacket, and a spot in the season’s finals. Returning are on-camera color commentators Rob Riggle and Joe Tessitore, sideline correspondent Jeannie Mai as well as executive producer and resident golf pro Stephen Curry. In season four (titled Holey Moley Fore-Ever), The Muppets join the series and head to the course, determined to help the show stay on air fore-ever. Joining in the fun are Kermit the Frog, Fozzie Bear, Animal, Swedish Chef, Pepé the King Prawn, and Camila the Chicken.

The fourth season of Holey Moley averages a 0.41 rating in the 18-49 demographic and 2.67 million viewers in the live+same day ratings (including DVR playback through 3:00 AM). Compared to season three, that’s down by 3% in the demo and up by 1% in viewership. While these numbers don’t include further delayed or streaming viewing, they are a very good indicator of how a show is performing, especially when compared to others on the same channel. There can be other economic factors involved in a show’s fate, but typically the higher-rated series are renewed and the lower-rated ones are cancelled. Find out how Holey Moley stacks up against other ABC TV shows.

Will ABC cancel or renew Holey Moley for season five? This show has become a staple of the network’s summer schedule, appears relatively inexpensive to produce, and does pretty well in the ratings. I think it will be renewed. I’ll update this page with breaking developments. Subscribe for free alerts on Holey Moley cancellation or renewal news.

What do you think? Do you hope that the Holey Moley TV show will be renewed for a fifth season? How would you feel if ABC cancelled this TV series, instead?