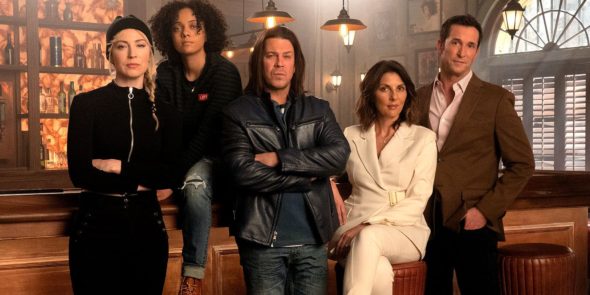 Leverage: Redemption is returning for the second half of its first season next month, and IMDb TV has released a new video teasing the series’ return. Gina Bellman, Aldis Hodge, Christian Kane, Beth Riesgraf, Noah Wyle, and Aleyse Shannon star in the Leverage sequel series which follows a group that helps ordinary people fight the corporate bad guys.

IMDb TV revealed more about the return of the drama in a press release.

“In this new iteration and new world, the Leverage crew have watched as the rich and powerful continue to take what they want without consequence. Grifter Sophie Devereaux (Gina Bellman), thief Parker (Beth Riesgraf), hitter Eliot Spencer (Christian Kane), and hacker Alec Hardison (Aldis Hodge) have watched the world change over the last eight years. Since their last job, it’s become easier-and sometimes legal-for the rich to become richer and the powerful to squash anyone who gets in their way.

To address the changes in the world around them, the team finds new blood in Harry Wilson (Noah Wyle), a corporate lawyer who is looking for redemption after realizing he’d been sitting on the wrong side of the table for his entire career, and Breanna Casey (Aleyse Shannon), Hardison’s foster sister who has a knack for computers, robotics, and getting into trouble.”

Check out the video teasing the return of Leverage: Redemption season one set for October 28th below.

What do you think? Are you excited about the return of this sequel series? Are you hoping that it will be renewed for a second season?

This is a great show with great story lines and great characters. Please bring it back!

It’s on Amazon prime new series on free advertising middle of column on top section. So good love this show both shows one of my favorite shows.

Please renewed another season leverage Remdemption revival so good on amazon prime video series look forward to seeing it every episode. Never missed any episode of it. Enjoy it and love it. Such a great show spy crime drama.

Love this show. Can hardly wait for the second part of season 1 to start. I hope that there will be many more seasons in the future.

Timothy Hutton has been cleared of any charges. They said Nate died but never said how. Hope this means they left the door open to find him alive. The show needs Hutton it needs the chemistry and his good acting. Wylie can go start his own crew

Well Timothy Hutton during times everyone getting sexual harassment few years ago which ridiculous by teenager from 1980’s don’t understand why left unsolved issue for 30 years. Enjoy main character and role but things had to be made on purpose.

I really love all of the team…and although what I’m going to say may not be “PC” I’m still rooting for Timothy Hutton to be vindicated.❤

Dean Devlin (whom I first knew as an actor from the 1987 series HARD COPY (with Michael Murphy and Wendy Crewson) is a producer I’ve found to produce consistently good-natured series: THE VISITOR, the various STARFATEs, LEVERAGE and THE LIBRARIANS. REDEMPTION is no exception, and I love the cast as much here as I did in the original series, even if Aldis Hodge is too busy playing Hawkman in BLACK ADAM to participate; Aleyse Shannon is delightful as his foster sister. Even without Tim Hutton (Noah Wylie is a Devlin “family member” carried over from LIBRARIANS), I’m hopeful that it… Read more »

Yes I am so excited for the second half of the new season. My favorite show of all times. These guys rock!

Absolutely bring it back! I watched all episodes of the original Leverage!