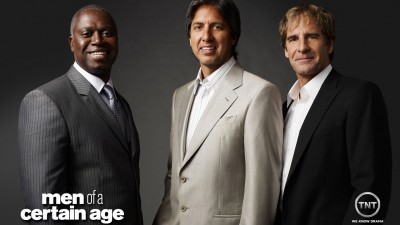 Fans have been gathering support via a Facebook page and have been encouraging others to sign a petition. Last week, Men of a Certain Age co-creator Michael Royce chimed in to express his appreciation to supporters and to let them know the best way to help the show.

Hi everybody. I want to say a giant THANK YOU for all your incredible efforts to help us find the show a home. We producers are exploring all options: broadcast, cable, pay cable, online… laserdisc, filmstrips, Viewmaster… you name it, we’re into it. And your guys’ energy has been seriously breathtaking.

Because we’re talking to a lot of the places you’ve contacted, at this point it would behoove you (and us) to not email them. They all know of your interest. They told us. : )

For fans who want to help, the best thing you can do right now is get more people to “like” this page and sign the petition, so we can show a prospective distributor how many people out there want this show back.

I hope I’m not being discouraging because frankly Ray and I are very moved by the outpouring of love and support. We don’t want to give up yet. And we won’t. We’ll let you know what’s happening when and if it does.

Thanks so so much. Hold your head up!
—Mike Royce

What do you think? Would you follow Men of a Certain Age to a different channel? To a premium cable channel? Would you watch online for a fee?

Quality T.V. Thanks for the two seasons my wife and I enjoyed. We will watch it on any
network smart enough to pick it up. We were really looking forward to the next season-Bring it back please!

My husband and I LOVED this show. It only got better in its second season.
What a disappointment!

Men of a Certain Age is a class act. It deserves an opportunity to to thrive. I will watch it on another network and I will spend my money with the companies that sponsor it. Thank you.

I am heartbroken to hear this show will not be continued. Would love to see it continued on another network.

Pls. save this show. This is a good show. When the show was over after six episodes, you never knew when it was coming back and the hiatus was too long. I would watch the show if it was picked up by another network.

Yes, I would gladly watch this show on any network, per pay online, whatever. This is a great show with great actors, the kind of quality TV that is rare these days. Here’s hoping it is saved.

A wonderful quality show that deserves a third season!

Of course we would watch Men of a Certain Age no matter what network it is on. We love this show & would feel cheated if it does not return for a third season. Hopefully, someone will pick it up this fall or whenever. We loved Friday Night Lights & what happened, they showed several episodes & then the finale. We were very disappointed that this series was canceled. What is the matter with these networks & the people that watch TV…………do they not know a good thing when they see it. Most of the garbage they show on TV… Read more »

My husband and I both love this show. We agree that it is one of the best things on TV. We will watch it where ever it goes! We also are big fans of Southland, which is also not around any more. Most of the junk that stays on year after year makes us wonder if the majority of the population is brain-dead.

as far as I know Southland will be back for another season on TNT.

Breaking Bad, Curb your Enthusiasm, Parenthood, and Men of a Certain Age….. I don’t know NBC or AMC…. or wherever continues it, i’ll follow.

This was one of the few shows on television worthy of renewal. Such a wonderful show. If they keep making it, I’ll keep watching… no matter where it airs. If I had the money, they could film in my living room!!!

Speaking from the other side of the pond: I would follow this show everywhere! But as Gianna pointed out: we Europeans couldn’t watch it – at least not legitimate… But we still did!!! I would be so happy if MoacA should find a new home and we would see another (or more) season!!!!

One of the best shows no doubt.

Loved this show. The only real “guy” show on TV in years. A real shame that it has been cancelled. I would watch it on another network.

This was quality TV – sadly there’s not much of it around these days. Sincerely hope it finds a new home

Men of a Certain Age is the best show that has ever been on TV. I would follow it to any network without hesitating. Every woman I know watches it and talks in groups about the show the next morning, emails friends, posts on facebook. Why they would ever cancel this show makes me wonder what kind of nut runs the network.
It has morals, heart, substance, relevance, and makes us all better and more tolerant human beings. It helps us laugh at ourselves. BRING IT BACK.