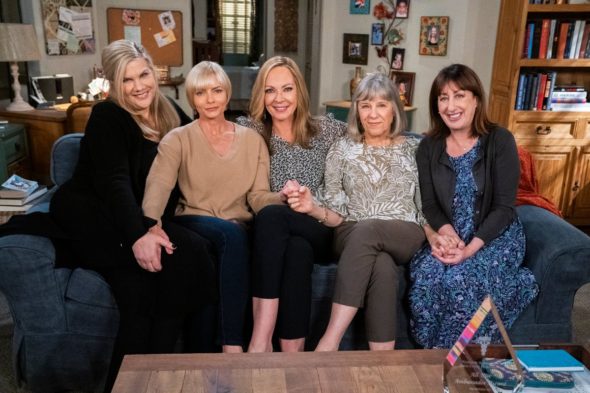 As fans of the Mom TV series know all too well, the long-running CBS sitcom was cancelled in March so, there won’t be a ninth season. Fortunately, there was still time for the cast and crew to give the characters some closure. The last episode airs tonight — number 170 — and the stars and some of the show’s guests have shared their memories and some thoughts on what the comedy has meant to them.

The Mom TV series stars Allison Janney, Mimi Kennedy, Jaime Pressly, Beth Hall, William Fichtner, and Kristen Johnston. Recovering addict Bonnie (Janney) must learn to adjust to life without her daughter and former roommate, Christy (Anna Faris), around. With a chaotic past behind her and a newly empty nest, Bonnie focuses on her marriage to her husband, Adam (Fichtner), and on what she wants to be now that she’s finally grown up. Now more than ever, Bonnie depends on the support of her friends, including wise Marjorie (Kennedy), wealthy and sometimes misguided Jill (Pressly), overly emotional Wendy (Hall), and her foster sister, Tammy (Johnston), who was recently released from prison. Through it all, these women help each other overcome their mistakes and stay sober in the face of whatever life throws their way.

I’m so proud of @MomCBS
This show is about something the universe really wants out there, that you can stop being afraid of life and you can just live it. #momseriesfinale #MomFinale pic.twitter.com/0rpG3j4akN

One of the best things about doing MOM was getting to meet @KChenoweth! She's as nice and positive as she seems. Thank you for the kind words about your experience. #seriesfinale https://t.co/uv3oQGYpge

A heartfelt thank you from all of us here at Mom to you, our incredible viewers. pic.twitter.com/IskGQLbrAN

What do you think? Did you enjoy the CBS series finale? Are you sorry to see the Mom TV show end?

I have loved this show from the first one. Was concerned that Christy leaving it may cause a problem with some fans. Not me! I still watched and loved it! Was sad when I heard it was cancelled.. Thank you for the laughs and the down right reality of this show. I miss all the cast so much.

Loved this show. The casting was superb. All of the characters brought their own dimension to the storyline. I thought it was even better after Ana Farris left. I can’t believe CBS would cancel this show! It was one of my favorites!