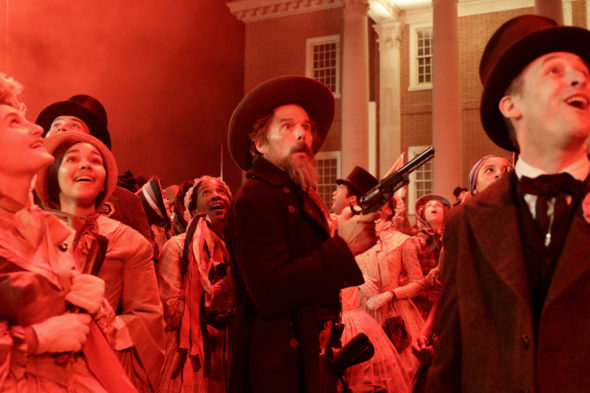 Will The Good Lord Bird TV show on Showtime follow the history books? As we all know, the Nielsen ratings typically play a big role in determining whether a TV show like The Good Lord Bird is cancelled or renewed for season two (in this case, we already know it’s ending). Unfortunately, most of us do not live in Nielsen households. Because many viewers feel frustration when their viewing habits and opinions aren’t considered, we invite you to rate all of the first season episodes of The Good Lord Bird here.

A historical and humorous drama series on Showtime, The Good Lord Bird is based on the 2013 novel of the same name by James McBride. The show stars Ethan Hawke, Joshua Caleb Johnson, Ellar Coltrane, Hubert Point-Du Jour, Beau Knapp, Nick Eversman, Jack Alcott, Mo Brings Plenty, Daveed Diggs, David Morse, Steve Zahn, Maya Hawke, Wyatt Russell, and Orlando Jones. The story weaves a humorous, dramatic, and historical tapestry of Antebellum America, spotlighting the complicated and ever-changing racial, religious, and gender roles that make up the American identity. The story is told from the point of view of Henry “Onion” Shackleford (Johnson), a fictional enslaved boy who becomes a member of John Brown’s (Hawke) motley family of abolitionist soldiers during Bleeding Kansas. Onion eventually finds himself participating in the famous 1859 raid on the U.S. Armory at Harpers Ferry. Brown’s raid failed to initiate the slave revolt he intended but was the event that started the Civil War..

What do you think? Which season one episodes of The Good Lord Bird TV series do you rate as wonderful, terrible, or somewhere between? Do you think that The Good Lord Bird should be renewed for a second season somehow? Don’t forget to vote, and share your thoughts, below.

I would like the series The Good Lord Bird to come back for a second season. This is a great series. Please bring back again and again.