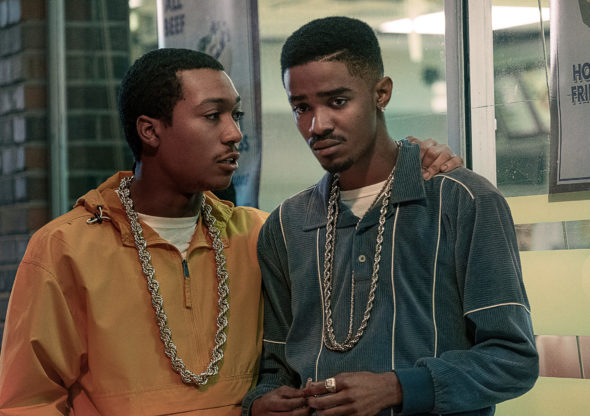 Now more than ever, Starz shows have to prove their value to survive. Has the BMF TV show been cancelled or renewed for a third season? The television vulture is watching all the latest cancellation and renewal news, so this page is the place to track the status of BMF, season three. Bookmark it, or subscribe for the latest updates. Remember, the television vulture is watching your shows. Are you?

A crime drama series airing on the Starz television network, the BMF TV show was inspired by a true story and stars Demetrius “Lil Meech” Flenory Jr., Da’Vinchi, Russell Hornsby, Michole Briana White, Myles Truitt, Steve Harris, Kelly Hu, La La Anthony, with Arkeisha “Kash Doll” Knight, Snoop Dogg, Leslie Jones, Christine Horn, Sydney Mitchell, Rayan Lawrence, and Serayah in recurring roles. Mo’Nique and Caresha “Yung Miami” Brownlee guest. The story chronicles the unconventional journey to success of Demetrius “Big Meech” Flenory (Flenory, Jr.) and Terry “Southwest T” Flenory (Da’Vinchi), two brothers who rose from the decaying streets of southwest Detroit in the late ’80s and gave birth to one of the most influential crime families in the country: Black Mafia Family. Rooted in family, loyalty, and brotherhood, the story explores the brothers’ complex relationships with their parents, Charles Flenory (Hornsby) and Lucille Flenory (White), who seek counsel from their spiritual advisor, Pastor Swift (Dogg). The season finds Meech and Terry at odds. Meech wants to expand the business beyond Detroit, while Terry is focused on school and launching a legitimate car-ride service with his Pops. But as the season unfolds, the streets implode and the brothers reunite. Our heroes risk losing everything as they seek to become stronger than ever and strategically execute a new vision for themselves and their business. Along the way, they form an alliance with Goldie (Mo’Nique), a sophisticated Atlanta strip club owner, who helps Meech lay the groundwork for his future. Expanding beyond Detroit to Lansing, Ohio and even the South, the brothers face nearly insurmountable obstacles, are confronted with a shocking discovery about a member of their own crew, and battle for every inch of territory..

The second season of BMF averages a 0.07 rating in the 18-49 demographic and 190,000 viewers. Compared to season one, that’s down by 46% in the demo and down by 50% in viewership in the live+same day ratings (includes DVR playback through 3:00 AM). While these numbers don’t include further delayed or streaming viewing, they are a very good indicator of how a show is performing, especially when compared to others on the same channel. There can be other economic factors involved in a show’s fate, but typically the higher-rated series are renewed and the lower-rated ones are cancelled. Find out how BMF stacks up against other Starz TV shows.

Will Starz cancel or renew BMF for season three? The ratings for Starz’s Friday night shows are notoriously low so the drop in BMF’s second season numbers are no great surprise. The cable channel has cancelled several shows recently, in preparation of Lionsgate’s plans to spin off its studio from Starz. Series have to pull their weight now more than ever. However, crime dramas have historically been among Starz’s best performers and there’s talk of BMF spin-offs so I think this series has a very good chance of being renewed. I’ll update this page with breaking developments. Subscribe for free alerts on BMF cancellation or renewal news.

What do you think? Are you glad the BMF TV show has been renewed for a third season? How would you feel if Starz had cancelled this TV series, instead?