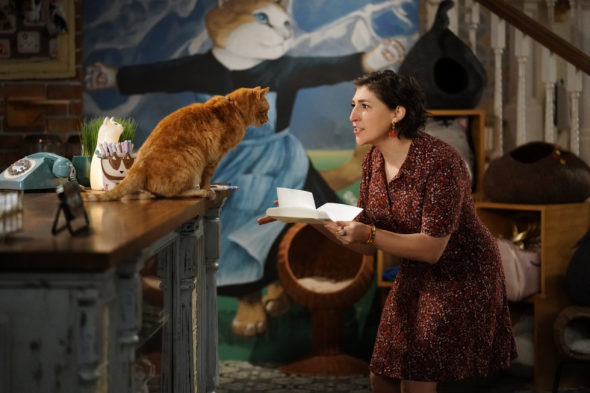 Blossom fans are in for a treat when Call Me Kat returns for its second season on FOX. Joey Lawrence, Jenna Von Oÿ, and Michael Stroyanov are joining Mayim Bialik for the season premiere in January. In the story, the trio (playing themselves) will visit Louisville for a celebrity golf tournament, and Kat will attend to see them because they were on her favorite show growing up, per The Wrap.

Blossom aired on NBC for five seasons, between 1990 and 1995. The series follows Blossom Russo as she lives with her single dad and two older brothers.

FOX began teasing the Blossom reunion on Instagram weeks ago, and the network has now released a new preview featuring the reunited former co-stars.

Leslie Jordan, Swoosie Kurtz, Cheyenne Jackson, Kyla Pratt, and Julian Gant star alongside Bialik on the Call Me Kat comedy. The show follows Bialik’s character, Kat, as she uses all of the money set aside by her parents for her someday wedding to open a cat cafe in Lousiville, Kentucky.

Call Me Kat returns to FOX on January 9th.

What do you think? Are you excited to see the gang from Blossom together again on Call Me Kat?

So ready!!! Love the show and the cast. Can’t wait to watch the new season.
Still watching season one.
Yeah!

I was a big Blossom fan and this looks like it’s going to be a fun episode. Looking forward to watching it

Look forward to seeing it new season in January new year. I can’t wait to watch after the holiday. So funny sitcom enjoy it and love it.

Finally! We have been waiting a long time for the ‘Call Me Kat’ Season 2 shows to start. This is a Funny show! All of the people in the Cast are terrific and they all work well together. Please do not cancel this show! Peace, Marc