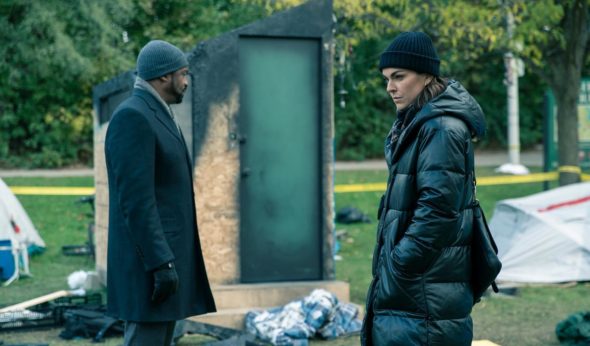 Jenny dives back into her work in the fourth season of the Coroner TV show on The CW? As we all know, Nielsen ratings typically play a big role in determining whether a TV show like Coroner is cancelled or renewed for season five without its star. Unfortunately, most of us do not live in Nielsen households. Because many viewers feel frustrated when their viewing habits and opinions aren’t considered, we invite you to rate all of the fourth season episodes of Coroner here.

A CW procedural drama series, the Coroner TV show stars Serinda Swan, Roger Cross, Andy McQueen, Ehren Kassam, Kiley May, Jon De Leon, and Thom Allison. Recurring players in the fourth season include Éric Bruneau, Mark Taylor, Jennifer Dale, Jonathan Tan, Sarah Podemski, and Gordon Cooper. The series follows the life of widowed Doctor Jenny Cooper (Swan), a coroner who investigates any suspicious, unnatural, or sudden deaths in the city of Toronto. Jenny taps into her intuition, as much as her intellect and heart, as she solves cases. In season four, Jenny is fresh from a recent loss but is determined to start anew. She tackles a myriad of new mysterious cases, while ring-leading the circus that is her life. To cope with grief, she buries her way into work but a new face in the office causes Jenny to re-examine her relationship with life and death. Jenny will move from isolation to openness this season and realize that the voices of the dead can help her to make sense of the life she is living.

What do you think? Which season four episodes of the Coroner TV series do you rate as wonderful, terrible, or somewhere between? Do you think that Coroner should be cancelled or renewed for a fifth season on The CW?