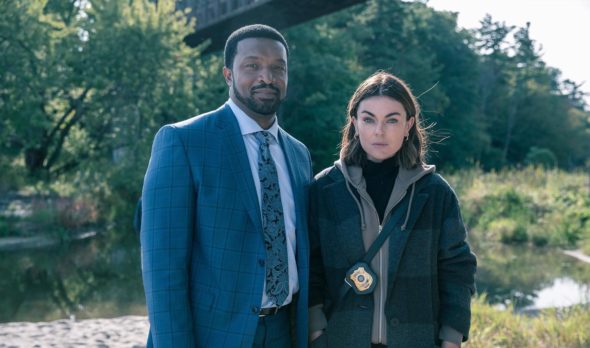 Jenny is determined to start anew after suffering a loss. Has the Coroner TV show been cancelled or renewed for a fifth season on The CW? The television vulture is watching all the latest cancellation and renewal news, so this page is the place to track the status of Coroner, season five. Bookmark it, or subscribe for the latest updates. Remember, the television vulture is watching your shows. Are you?

Airing on The CW television network, the Coroner TV show stars Serinda Swan, Roger Cross, Andy McQueen, Ehren Kassam, Kiley May, Jon De Leon, and Thom Allison. Recurring players in the fourth season include Éric Bruneau, Mark Taylor, Jennifer Dale, Jonathan Tan, Sarah Podemski, and Gordon Cooper. The series follows the life of widowed Doctor Jenny Cooper (Swan), a coroner who investigates any suspicious, unnatural, or sudden deaths in the city of Toronto. Jenny taps into her intuition, as much as her intellect and heart, as she solves cases. In season four, Jenny is fresh from a recent loss but is determined to start anew. She tackles a myriad of new mysterious cases, while ring-leading the circus that is her life. To cope with grief, she dives into her work, but a new face in the office causes Jenny to re-examine her relationship with life and death. Jenny will move from isolation to openness this season and realize that the voices of the dead can help her to make sense of the life she is living.

The fourth season of Coroner averages a 0.04 rating in the 18-49 demographic and 344,000 viewers in the live+same day ratings (including DVR playback through 3:00 AM). Compared to season three, that’s down by 56% in the demo and down by 46% in viewership. While these numbers don’t include further delayed or streaming viewing, they are a very good indicator of how a show is performing, especially when compared to others on the same channel. There can be other economic factors involved in a show’s fate, but typically the higher-rated series are renewed and the lower-rated ones are cancelled. Find out how Coroner stacks up against other The CW TV shows.

The CW
As of December 3, 2022, Coroner has not been cancelled or renewed for a fifth season. Stay tuned for further updates.

Will The CW cancel or renew Coroner for season five? If it’s produced, I think the network will air a fifth season, but there are doubts that the show will be renewed in Canada, where it originates. Following the completion of season four, Swan revealed that she didn’t want to continue with the series. Theoretically, Coroner could be reworked to go on without her, perhaps to eke out one or two more seasons, but that seems highly unlikely to happen. I’ll update this page with breaking developments. Subscribe for free alerts on Coroner cancellation or renewal news.

What do you think? Do you hope that the Coroner TV show will be renewed for a fifth season? How would you feel if The CW cancelled this TV series, instead?

The Coroner is a great show! The cast, from Jenny and Det McIvoie and her family and all the other great cast members who make the show so fulsome! The scrips are dynamite as are the scenes. Everything meshes. Dynamite show! My number one for the week!

Such a fabulous show!! Please continue!!