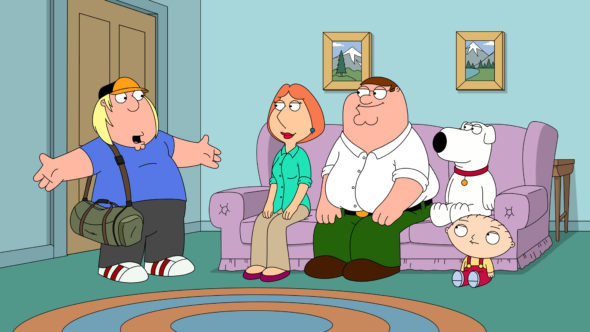 Some day, the Griffins will have a new network home. Has the Family Guy TV show been cancelled or renewed for a 21st season on FOX? The television vulture is watching all the latest cancellation and renewal news, so this page is the place to track the status of Family Guy, season 21. Bookmark it, or subscribe for the latest updates. Remember, the television vulture is watching your shows. Are you?

Airing on the FOX television network, Family Guy stars voice actors Seth MacFarlane, Alex Borstein, Mila Kunis, Seth Green, Patrick Warburton, and Arif Zahir. The series follows a stereotypical sitcom dad, Peter Griffin (MacFarlane). Overweight and a bit dim, Peter is close to his family but is also a heavy drinker. A piano teacher, wife Lois (Borstein) is a stay-at-home mother and usually ends up being the impatient voice of reason. An outcast at school, 18-year-old Meg (Kunis) is the family’s preferred dumping ground. Overweight like his dad, 13-year-old Chris (Green) is socially awkward and clueless, especially when it comes to the opposite sex. The baby of the family, one-year-old Stewie (MacFarlane) is diabolically clever, if sexually confused. Rounding out the Griffin family is their talking dog, Brian (MacFarlane). A ladies’ “man” who is particularly devoted to Lois, Brian is about one step away from AA.

The 20th season of Family Guy averages a 0.44 rating in the 18-49 demographic and 1.36 million viewers. Compared to season 19, that’s down by 3% in the demo and up by 4% in viewership in the live+same day ratings (includes DVR playback through 3:00 AM). While these numbers don’t include further delayed or streaming viewing, they are a very good indicator of how a show is performing, especially when compared to others on the same channel. There can be other economic factors involved in a show’s fate, but typically the higher-rated series are renewed and the lower-rated ones are cancelled. Find out how Family Guy stacks up against other FOX TV shows.

Note: There’s a disparity in the season numbers of this show. In FOX’s press materials, this is designated as season 20. But, if you look at FOX’s website, they label the same episodes as season 21. Since the press materials are theoretically more official, we follow the press release numbering.

Will FOX cancel or renew Family Guy for season 21? The show does pretty well in the ratings for FOX but makes most of its profits via syndication and streaming. However, since FOX no longer owns the show, the network doesn’t benefit from post-network airings. I’m sure that Family Guy will be renewed for a 21st season but, at some point, I think first-run episodes will move to a Disney-owned channel or streaming service. I’ll update this page with breaking developments. Subscribe for free alerts on Family Guy cancellation or renewal news.

What do you think? Do you hope that the Family Guy TV show will be renewed for a 21st season? How would you feel if FOX cancelled this TV series, instead?