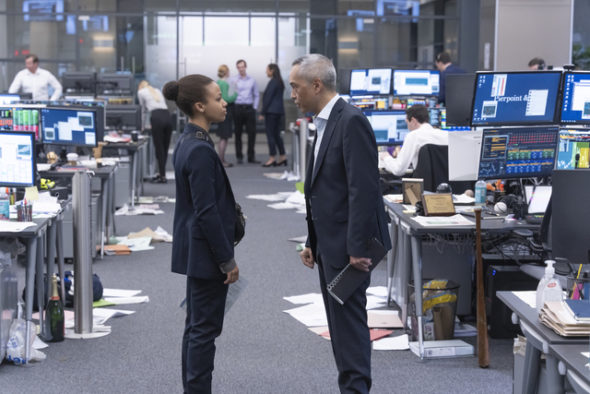 The competition is tougher than ever for this crew. Has the Industry TV show been cancelled or renewed for a third season on HBO? The television vulture is watching all the latest cancellation and renewal news, so this page is the place to track the status of Industry, season three. Bookmark it, or subscribe for the latest updates. Remember, the television vulture is watching your shows. Are you?

Airing on the HBO cable channel in the United States, the Industry TV show stars Myha’la Herrold, Marisa Abela, Harry Lawtey, David Jonsson, Ken Leung, Conor MacNeill, Alex Alomar Akpobome, Indy Lewis, Katrine de Candole, Jay Duplass, Sonny Poon Tip, and Adam Levy. Recurring cast members include Sarah Parish, Nicholas Bishop, Sagar Radia, Mark Dexter, and Caoilfhionni Dunne. The story revolves around a group of young graduates who are competing for a limited number of permanent positions at a prestigious London investment bank. The five young graduates hoping to work at Pierpoint & Co. are hungry American outsider Harper Stern (Herrold), party-boy Robert Spearing (Lawtey), privileged Yasmin Kara-Hanani (Abela), Hari Dhar (NRizwan), and Augustus ‘Gus’ Sackey (Jonsson), a graduate of Eton and Oxford. Season two picks up a year after the height of the pandemic. The grads are no longer allowed to hide behind their graduate status. The market is ripping, and Pierpoint’s back to work or else mandate has the trading floor more charged up and paranoid than ever.

On HBO, the second season of Industry averages a 0.01 rating in the 18-49 demographic and 79,000 viewers in the live+same day ratings (includes all DVR playback through 3:00 AM). Compared to season one, that’s down by 50% in the demo and down by 25% in viewership. While these numbers don’t include further delayed or streaming viewing, they are a very good indicator of how a show is performing, especially when compared to others on the same channel. Though other economic factors are involved, the higher-rated shows usually get renewed and the lower-rated ones get cancelled. Find out how Industry stacks up against other HBO TV shows.

Will HBO cancel or renew Industry for season three? This show is a co-production with BBC so it doesn’t cost HBO as much to produce. The traditional ratings continue to be low but it’s got a good amount of viewer and reviewer support. I think it’s got a good chance of being renewed. I’ll update this page with breaking developments. Subscribe for free alerts on Industry cancellation or renewal news.

What do you think? Do you hope that the Industry TV show will be renewed for a third season? How would you feel if HBO cancelled this TV series, instead?