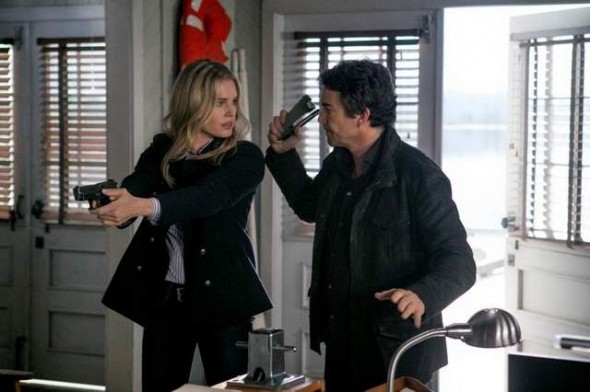 Tonight, TNT airs the last episode of King & Maxwell’s first season. Should the cop series return for a second season or should it be cancelled instead? Is it a ratings hit? Cancel or keep it?

The show debuted on June 10th to 3.52 million viewers with a 0.6 rating in the 18-49 demographic. That was a very positive start. Viewership fell 21% in week two but climbed back upward in later weeks.

A couple weeks ago, King & Maxwell nearly matched its premiere with 3.39 million and a 0.5 demo rating.

Though they haven’t announced it yet, I suspect that TNT will bring King & Maxwell back for a second season.

But, what do you think? Does King & Maxwell deserve a second season? Or, should it be cancelled to make way for something else? Cancel or keep?

I loved this show. Bring it back for another season.

Please, Please, Please renew this show. It is interesting, and just plain good, good, good. I can’t understand why renew low rating shows and then a really good entertainer like this one has to be cancelled. Is somebody being paid under the tale to renew a show. Thank You and again, please renew THIS PROGRAM.

YES, Please bring back King and Maxwell. I love the books and loved the TV series!

PLEASE, PLEASE bring back King and Maxwell. It was so different – quirky – that’s what separate it from all the formulaic shows out there!!!

It’s not too late to do the right thing 🙂

bring it back please loved the show don’t shoot yourself in the foot .

This was a great series!!! I thought you were different than other networks TNT but I was wrong!!! Give it another shot, the fans love it!!!! If you have to cancel something then take off Franklin and Bash!!!!!
I watch so many of your series and I love them, King and Maxwell was on my faves list!! I can’t believe this happened!!!!!!!!

Bring it back. Loved it.

Please bring it back…the show just needs a chance to get the writers and the audience time to get to know each other. The cast is great and the books that it’s based on are a good read!

BRING IT BACK!!!! love the series and books