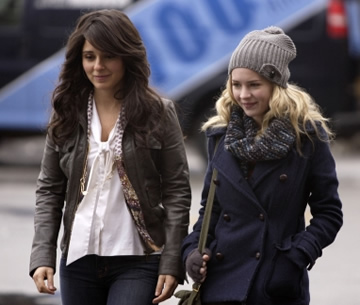 It is so ridiculous… It has just come onto E4 in England, and I LOVE IT! However, my viewing doesn’t frikkin’ count because I didn’t watch it on CW on the premiere night!

The ending was so silly and I can’t believe it is over.

Wow uh none of the revolving storylines had closer. Oh if only this show would have been on fox then it would have had the the right ending progressed into the future (I.e. The oc) so at least fans could have had proper closure to this party of five-esque heartfelt dramatic series.

Why is every decent show being cancelled in favor of keeping shows that promote the skankiest of people and habits? Cancelling this amazing show is lame on the part of CW and they need to be glad they have The Vampire Diaries to keep them afloat, or I’d be done with them and their lame channel. Bad move CW – very bad move. Life Unexpected was refreshingly honest and one I looked forward to every week and during the entire down season. Hey CW… Epic Fail

Too bad!!! We have enjoyed and looked forward to watching this show as a family each week. It seems that good “family shows” are just not what the networks and viewers want.

I love this show. I can’t believe it would be cancellecd so soon.

I am really sad to hear that this show is being canceled..I really love watching the show unfortunately I work nights so I am unable to see it at the time it airs but I watch it online. It just seems ya’ll cancel all the good shows and keep all the stupid shows especially those reality shows..come on already those stupid shows are on every other channel already.

I totally agree with the statement that all the good shows are cancelled and all the stupid ones are aired. I can’t stand reality shows. Sorry to all the Jersey shore fans but I just can’t get into it. I like shows like Life Unexpected, Vampire Diaries and One Tree Hill.

NO!!!! ARE YOU KIDDING ME!! THIS IS SUCH A GOOD SHOW!! THIS SHOW LITERALLY GETS ME THROUGH THE WEEK! I CANNOT BELIEVE THIS!!!!!

I am really sorry that this show was cancelled it was one of my favorites. I really loved the show so sad. And I am over the age that ususally watches this type of show. Not the right promoting or something happened.

This is rediculous I love this show,dnt take it awayy!:/

I completely love this show and yes their has been too many shows cancelled over the recent past few year. I say STOP cancelling great shows like this one. On the other hand Lux is a *****