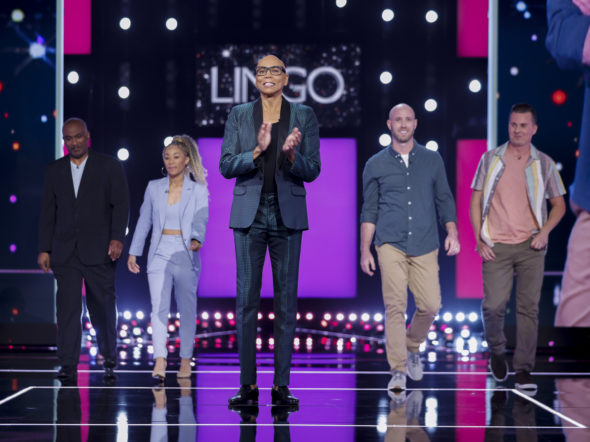 It’s a race to the $50k showdown. Has the Lingo TV show been cancelled or renewed for a second season on CBS? The television vulture is watching all the latest cancellation and renewal news, so this page is the place to track the status of Lingo, season two. Bookmark it, or subscribe for the latest updates. Remember, the television vulture is watching your shows. Are you?

A word-guessing game show airing on the CBS television network, the Lingo TV series is the latest incarnation of a format that was introduced in 1987. Hosted by RuPaul Charles, this newest version features four teams of two contestants. Two teams compete against each other in multiple rounds of word-guessing games of varying length and difficulty to build up a bank of prize money. By the end, only two of the four teams remain, and each has its own bank of money. In this last part of the game, the two remaining teams have two minutes each to guess as many five and six-letter words as possible. The winning team of the showdown takes home both teams’ banks and an additional $50,000.

The first season of Lingo averages a 0.43 rating in the 18-49 demographic and 2.97 million viewers. While these numbers don’t include further delayed or streaming viewing, they are a very good indicator of how a show is performing, especially when compared to others on the same channel. There can be other economic factors involved in a show’s fate, but typically the higher-rated series are renewed and the lower-rated ones are cancelled. Find out how Lingo stacks up against other CBS TV shows.

Will CBS cancel or renew Lingo for season two? The ratings could be better, but the show appears inexpensive to produce. If it doesn’t work out for the regular season, Lingo could still survive. The series could be used to fill empty spots on the network’s schedule in the times of the year when viewership is traditionally lower (like around the holidays or over the summer). I think there’s a good chance Lingo will be renewed. I’ll update this page with breaking developments. Subscribe for free alerts on Lingo cancellation or renewal news.

What do you think? Do you hope that the Lingo TV show will be renewed for a second season? How would you feel if CBS cancelled this TV series, instead?