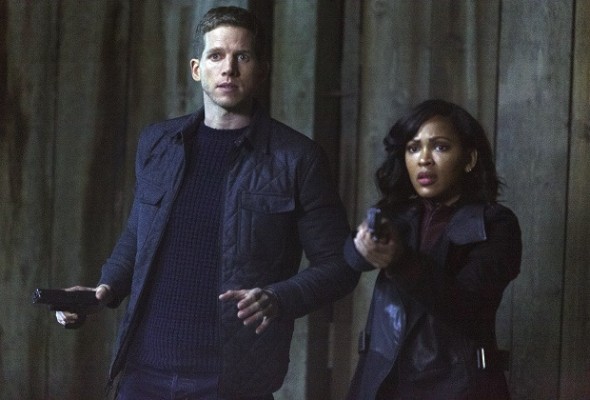 FOX had high hopes for their Minority Report TV series but the series received poor reviews and very low ratings in its debut. The numbers have gotten much worse, week by week.

To no surprise, the network cut the show’s episode order, down from 13 to 10 installments. The season will wrap on November 30th. While FOX hasn’t called this move a cancellation, it’s clear that the series won’t be back next year.

Despite this bad news, Minority Report executive producer Max Borenstein is still hoping that the series can be renewed for a second season. If it isn’t, he believes fans will feel satisfied by the defacto series finale. Via TV Line:

Speaking of being done, given the show’s shortened season order, one can’t help but wonder if the finale will also act as a fulfilling conclusion.

“Yeah, absolutely,” Borenstein assures us. “We always had this 10-episode arc in mind because we were always airing 10 episodes [this fall]. We have a really cool, satisfying ending, and if we get to do a second season, we’ll pick it up from there. But if we don’t, it’ll be a great ending regardless.”

What do you think? Do you think that Minority Report has been essentially cancelled? Would you watch a second season?

I love this show. It’s a very great show indeed. And I don’t understand why it should be cancelled… All the visions and investigations are great and merhn I love the technology. Please continue through season 2 and beyond and just spice up the market a bit. And trust me it’s gonna be one of the top most series in the world… Wish I could be in it though. Nice job with this series… It’s great

I definitely want the show back on I really like it and can’t believe that it was not picked up for another season that really upsets me I really thought it was going to be on for a while but just like a couple other shows that I really liked they got canceled to and they were great shows to but I have noticed that the shows that I really like keep getting canceled and the one’s that aren’t that good are still on , very strange if you ask me they should definitely bring the show back!!

A satisfying conclusion? Hmm..
Had the pace of earlier eps been more like the ending, the ratings may well have been up there. I haven’t read the critics as this is often emionally and psychologically destructive, but as the series is done I might. It’s a bitter pill but it might yield some insight; Art Dept, vFX, all aspects really – and the cast? – I’ll miss ’em. 4.30 am coffee shop reflections

I watched this as a confirmed Philip K. Dick fan. And it grew on me, week by week, to the point that, before I knew it, I had fallen in love with the show. The cast were all fantastic, the production sensibility and the scripts most ingenious. I just watched Ep 10, and went to IMDB to get more info only to discover that it had been cancelled. I realise this must be the result of ratings and critical reviews (or maybe ratings exclusively), which leads me to a rather morbid speculation – that there is no hope for the… Read more »

Love that show, bring it back.

I love this show they should continue it please

Just watched all these episodes of this shows to find it canceled. Excuse my language, I’m about to ******* give up on fox cancelling such a great show, such bull ****!!!!!

Absolutely loved the show & the de facto ending but I’d be over the moon if the show were brought back for a season 2. In many ways the series was better than the movie but the backstory of the movie & then including the flashbacks, never mind getting Daniel London to reprise Wally was ingenious.

I loved the show & can only hope if Fox won’t pick it up maybe SyFy will.

Really enjoyed this series; please say there will be a second season!

Have to bring Minority Report back on the line…

Please bring back Minority Report!!! It was one of my favorite shows!!!

Please bring the show back .love this show,need to know what happens next .please

Please bring it back love this show .need to know what happens next soooo bad

bring it back plxxxx this was my #1 show i need to to know what happens next!!

This show was great I loved everything about always left me wondering what’s next. I felt some chemistry going on and I wanted to know what i felt going on real. Like this show was just soooo great I don’t know how to put it in words man i wish I could do more then comment.