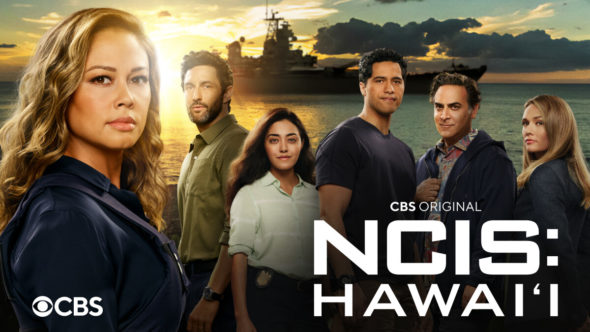 The NCIS franchise has been a very successful one for CBS. While the first season’s ratings for NCIS: Hawai’i weren’t as strong as the mothership’s, they were good enough to land the freshman series a renewal. Will viewership grow in year two? Will NCIS: Hawai’i be cancelled or renewed for season three? Stay tuned.

10/4 update: You can see the latest night’s ratings in context.

For comparisons:  Season one of NCIS: Hawai’i on CBS averaged a 0.51 rating in the 18-49 demographic and 5.48 million viewers in the live+same day ratings.

What do you think? Do you like the NCIS: Hawai’i TV series on CBS? Should it be cancelled or renewed for a third season?

NCIS Hawaii could be a good show, but to focus so much time on a lesbian relationship is a major distraction. There has always been banter with each NCIS show, but the excessive focus on this one relationship seems to be done just to make a point, rather than being integrated more carefully into the plot. If they keep going along these lines, my family won’t be watching.

We agree that the program has become very explicit and not something I am comfortable watching with my family.

Ncis Hawaii should be renewed

The lead actress is awful and weak. Please cancel ncishawaii. They should hire a real actress not highschool musical like actress.