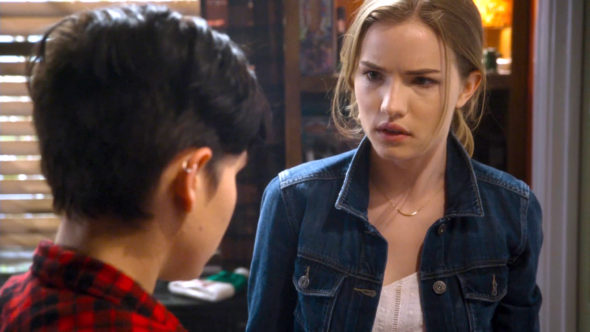 Tonight marks the second season finale of the Scream TV series on MTV. But, will it be the last episode of the entire series? Will it return for a third season? Should it be cancelled?

The first season of Scream averaged a 0.34 rating in the 18-49 demographic with 750,000 viewers. Those weren’t great ratings and the current season’s numbers have dropped a lot lower. The nine installments have averaged 0.19 in the demo and 380,000 viewers — more than a 45% drop season-to-season.

Based on the ratings alone, it seems unlikely that MTV will order a third season but, these days, you never know.

What do you think? Should MTV renew Scream for a third season or cancel it instead?

I like that they opened a door to a possible third season but at the same time I’m going to be a little peeved about it if/when they don’t decide to renew. But one of the main reasons the ratings are so low are MTV’s own fault — in the beginning of the season (can’t remember, think it was on Mondays??) they had it on at 11 o’clock at night!! I mean, come on! Give the show a chance. Which, in their eyes, maybe they did when they moved it to Tuesday at a more normal time of 10:00 —… Read more »

I really enjoyed this season much more than the first.. Didn’t realize how ****** the ratings were.. The end of the finale someone calls Kerian while he’s in jail and it’s the killers voice. I don’t think they would have put that in there if they weren’t going to do atleast one more season.

PLEASE air a 3rd season of SCREAM. I can’t speak for the nation wide ratings, but both I and my stepdaughter are loyal fans…that’s a 67% of OUR household. Listen, there’s A LOT of BAD cable TV out there that is aired regardless of it’s viewing numbers…this show actually has some production value. Please DO NOT GIVE UP ON IT MTV….you’ll lose at least 50% of your viewers in my household if you do.

They can’t end the whole show of scream like that kieran in jail and gets a phone call supposed to be from his lawyer. But it was another killer saying kieran why u wear my mask.

Either renew or give Santiago Segura his own show because I’m too in love with him.

They will make. A season 3 they already confirm it on scream after dark

Pleassssse renew!! My husband and I live for this show every week! The writers do such a good job at keeping us guessing and now I can’t wait to answer the question tonight’s finale left me with!! And if mtv can’t do it they should let someone else take it over because it can’t just end like that!

I’m hooked, must have season 3!