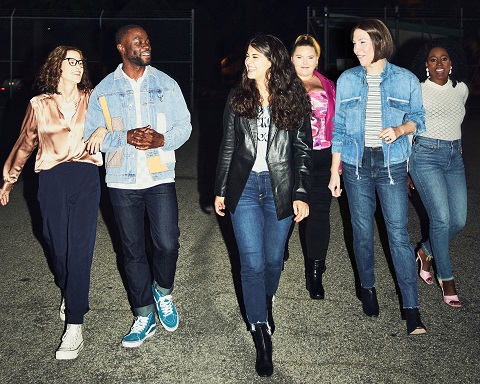 Freeform is kicking off 2022 with new programming. The cable channel has announced premiere dates for Single Drunk Female and season 4B of Grown-ish.

Starring Sofia Black-D’Elia, Ally Sheedy, Rebecca Henderson, Sasha Compère, Lily Mae Harrington, and Garrick Bernard, Single Drunk Female follows a woman who returns home to live with her mother as a way to sober up and straighten out her life.

As for Grown-ish, the road to graduation day is almost at an end. Yara Shahidi, Trevor Jackson, Francia Raisa, Emily Arlook, Jordan Buhat, Chloe Bailey, Halle Bailey, Luka Sabbat, and Diggy Simmons star in the series, a spin-off of Black-ish. That series will start its final season on ABC on January 4th.

Freeform revealed more about the upcoming programming in a press release:

“Freeform announced its January schedule, which includes the series premiere of the highly anticipated comedy Single Drunk Female, from Jenni Konner and Simone Finch, with a two-episode premiere on Thursday, Jan. 20, and new episodes of grown-ish on Thursday, Jan. 27. All titles will be available to stream on Hulu the day after the premiere.

Single Drunk Female will debut with back-to-back episodes on THURSDAY, JAN. 20, starting at 10 p.m. After its premiere, the series will air new episodes Thursdays at 10:30 p.m., following “grown-ish.” In this dramedy, a public flame-out at a New York media company forces 20-something alcoholic Samantha Fink to seize the only chance she has to sober up and avoid jail time: moving back home with her overbearing mother, Carol. Back in Greater Boston, Samantha restarts her life, working at the local grocery store while surrounded by all of the triggers that made her drink in the first place. Confronted with remnants of her old life, including run-ins with her perfect former best friend, who is now dating her ex, Samantha sets out on a path to move past her worst self and figure out her best self. Kinda. “Single Drunk Female” stars Sofia Black-D’Elia, Ally Sheedy, Rebecca Henderson, Sasha Compère, Lily Mae Harrington and Garrick Bernard. The series comes from 20th Television and is written and created by Simone Finch (The Connors), who will executive produce along with Jenni Konner (Girls, Camping), Daisy Gardner (Silicon Valley, The Goldbergs), Phil Traill (Good Girls), Nora Silver and Leslye Headland. Headland (Russian Doll and Star Wars: The Acolyte) directed the pilot.

Freeform’s number one comedy series, Emmy(R)-nominated grown-ish, will return for the conclusion of senior year on THURSDAY, JAN. 27, at 10 p.m. The countdown to graduation is on and senior year at Cal U is in full swing. From unexpected hookups to wild nights with the crew, new life choices are on the horizon. Let the celebrations–and the complications–commence! The series stars Yara Shahidi, Trevor Jackson, Francia Raisa, Emily Arlook, Jordan Buhat, Chloe Bailey, Halle Bailey, Luka Sabbat and Diggy Simmons. The series is produced by ABC Signature, a part of Disney Television Studios. It is executive produced by Kenya Barris, Julie Bean, Jenifer Rice-Genzuk Henry, Craig Doyle, Yara Shahidi, Anthony Anderson, Laurence Fishburne, Helen Sugland, E. Brian Dobbins and Michael Petok.”

Check out a preview for the new episodes of Grown-ish below.

What do you think? Are you excited to see these two Freeform shows in January?