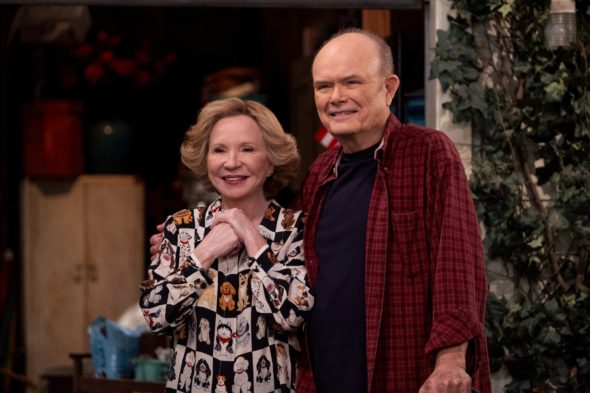 A trip to see her grandparents might be just what Leia needs. Has the That ’90s Show TV show been cancelled or renewed for a second season on Netflix? The television vulture is watching all the latest cancellation and renewal news, so this page is the place to track the status of That ’90s Show, season two. Bookmark it, or subscribe for the latest updates. Remember, the television vulture is watching your shows. Are you?

A period comedy series streaming on the Netflix subscription service, That ’90s Show stars Kurtwood Smith, Debra Jo Rupp, Callie Haverda, Ashley Aufderheide, Mace Coronel, Maxwell Donovan, Reyn Doi, and Sam Morelos. Guests include Topher Grace, Mila Kunis, Ashton Kutcher, Laura Prepon, Wilmer Valderrama, Tommy Chung, and Don Stark. It’s a sequel to the That ’70s Show which ran for eight seasons. The series picks up years after the original, in 1995 Wisconsin. Leia Forman (Haverda), the teenage daughter of Eric (Grace) and Donna (Prepon), is desperate for some adventure in her life (or at least a best friend who isn’t her father). When Leia arrives in Point Place to visit her grandparents, Red (Smith) and Kitty (Rupp), Leia finds what she’s looking for right next door when she meets the dynamic and rebellious Gwen Runck (Aufderheide). With the help of Gwen’s friends, including her lovable brother Nate (Donovan), his smart and laser-focused girlfriend Nikki (Morelos), the sarcastic and insightful Ozzie (Doi), and the charming Jay (Coronel), Leia realizes adventure could happen there just as it did for her parents all those years ago.

Will Netflix cancel or renew That ’90s Show for season two? The streaming service makes its renewal decisions based on several factors, but Netflix’s version of ratings (millions of minutes watched) is a big piece of the puzzle. Shows that amass more than 100 million minutes in their first week are very likely to be renewed. Half-hour shows are at a disadvantage since they typically have fewer minutes in a season than an hour drama series would. Completion rates (the percentage of people who finish watching episodes) and the cost of producing another season are also part of Netflix’s decision-making process. Generally speaking, Netflix TV shows that will be renewed are usually picked up within a month or so of the series or season premiere. I’ll keep my ears open and an eye out for news, and will update this page with breaking developments. Subscribe for free alerts on That ’90s Show cancellation or renewal news.

What do you think? Do you hope the That ’90s Show TV show will be renewed for a second season? How would you feel if Netflix cancelled this TV series, instead?