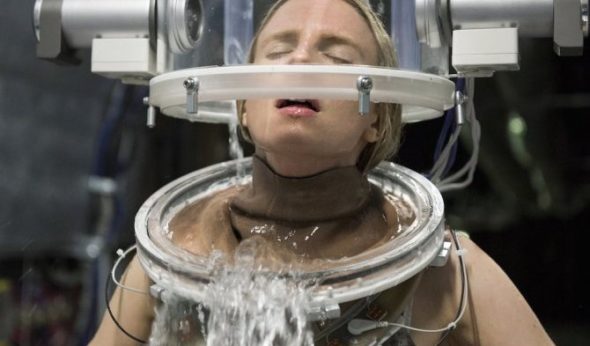 OA has gone missing — again. Netflix has decided to cancel The OA TV series after two seasons and 16 episodes.

A sci-fi mystery, The OA stars Brit Marling, Emory Cohen, Scott Wilson, Phyllis Smith, Alice Krige, Patrick Gibson, Brendan Meyer, Brandon Perea, Ian Alexander, and Jason Isaacs. The story centers on Prairie Johnson (Marling), an adopted young woman who is blind when she goes missing, but returns years later, with her vision restored. Although she won’t reveal what happened to her family and law enforcement, she now refers to herself as “The OA.” She assembles a team, tells them her tale, and says there are others they need to help. In the second season, OA navigates a new dimension, in which she had a completely different life as a Russian heiress.

“We are incredibly proud of the 16 mesmerizing chapters of The OA, and are grateful to Brit and Zal [Batmanglij] for sharing their audacious vision and for realizing it through their incredible artistry,” said Netflix’s Original Content VP, Cindy Holland. “We look forward to working with them again in the future, in this and perhaps many other dimensions.”

The cancellation was revealed almost five months after the second season dropped. We know that Netflix’s renewal decisions are typically made within a month of a season’s release so the reveal that there won’t be a third season isn’t a big surprise.

Here are responses from co-creators Marling and Batmanglij regarding the cancellation:

What do you think? Did you enjoy watching the two seasons of The OA TV show on Netflix? Would you have watched season three?

What a disappointment that there will not be a third season of the OA. It was magnificent and truly drew you into the show. It had endless possibilities and really captured your imagination.

I am sorely disappointed in hearing that there will be no third season for the oa.
It is an amazing show and a great loss for not being continued.
This story has had sigificant impact will continue to stay with me.
I lament the loss.

I am very unhappy this series was canceled and hope that another streaming service will pick it up. The story needs to be finished.

It really was the things Holland says but it was also flawed in many ways. I’m sorry they couldn’t tighten it, since it seems the market won’t support ambitious but uneven work.

I loved the show, and was looking forward to another season. Bummer

I enjoyed this show. It was different from anything else on TV.

I loved the OA and am so disappointed.

I enjoyed this show immensely and looked forward to seeing where they were going to take it.

I looked forward to each episode. Intiguing and eye-opening…yet again another tv show cancelled that I found compelling to watch. Sad to see it go.

If you have insomnia, this is good medicine for you.

Horrible show! So strange and boring! I would’ve never watched season 3 – trying to watch the 1st two was a waste of time. Ridiculous!

It was strange – but oddly compelling strange. I watched both seasons & still don’t know if I liked the show. With this cancellation I don’t have to think about it anymore.

The premise sounded interesting, but then I watched the first season – as much as I wanted to like it – I just could not get into it.

Season One was a tire fire…wouldn’t have watched Season Two if it would have cured cancer…so…no it won’t be missed.

I really enjoyed watching The OA. I was really looking forward to seeing the rest of the story. Now I guess we will never know 🙁