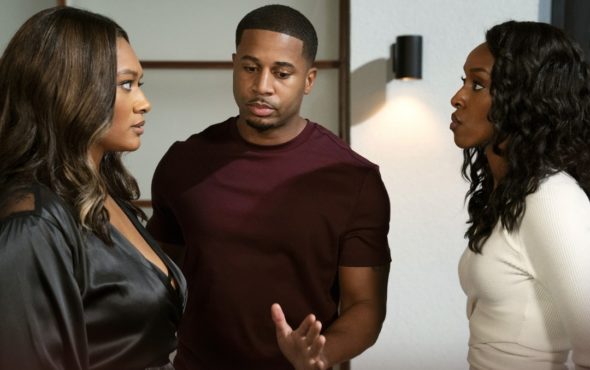 These very different friends are looking to find their places in the world while still remaining true to themselves and each other. Has the Sistas TV show been cancelled or renewed for a sixth season on BET? The television vulture is watching all the latest cancellation and renewal news, so this page is the place to track the status of Tyler Perry’s Sistas, season six. Bookmark it, or subscribe for the latest updates. Remember, the television vulture is watching your shows. Are you?

A drama series airing on the BET cable channel, Tyler Perry’s Sistas stars KJ Smith, Mignon, Ebony Obsidian, Novi Brown, Crystal Renee’ Hayslett, DeVale Ellis, Chido Nwokocha, Anthony Dalton II, Brian Jordan Jr., Kevin A. Walton, and Trinity Whiteside. The series follows a group of single black women bound together by their long-standing friendship. These five ladies — Andi (Smith), Danni (Mignon), Karen (Obsidian), Sabrina (Brown), and Fatima (Hayslett) — go after what they desire and handle the blows of life with resilience, determination, and the support of each other. The fifth season finds the ladies jumping back into the world of dating.

The fifth season of Tyler Perry’s Sistas averages a 0.18 rating in the 18-49 demographic and 961,000 viewers. Compared to season four, that’s down by 16% in the demo and down by 2% in viewership in the live+same day ratings (including DVR playback through 3:00 AM). While these numbers don’t include further delayed or streaming viewing, they are a very good indicator of how a show is performing, especially when compared to others on the same channel. There can be other economic factors involved in a show’s fate, but typically the higher-rated series are renewed and the lower-rated ones are cancelled. Find out how Sistas stacks up against other BET TV shows.

Will BET cancel or renew Tyler Perry’s Sistas for season six? Along with The Oval, this show has been a solid performer for BET. Unless Perry wants to end it, I think there’s a very good chance that Sistas will be renewed. I’ll update this page with breaking developments. Subscribe for free alerts on Tyler Perry’s Sistas cancellation or renewal news.

What do you think? Do you hope that the Tyler Perry’s Sistas TV show will be renewed for a sixth season? How would you feel if BET cancelled this TV series, instead?

I think they should cancel the series. The depiction of black women is being dragged ass desperate and unsure, and also crazy and intimidated. The storylines are carried out too much. Karen has been pregnant for almost 2 seasons not showing Zach has been drags for being a felon by supposedly to professional women who sleep around with a married man, but their opinions are above his. This is pretty much said I’m not watching anymore.