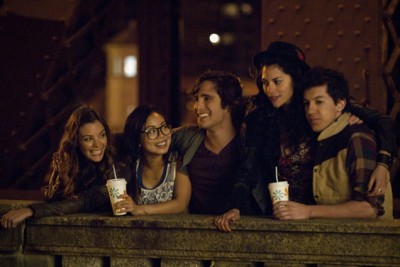 MTV has quietly shipped their Unemployed sitcom off to Saturday nights, an evening when their target audience is likely out doing other things. Is this a bad sign for the show’s future?

The sitcom has been under-performing in the ratings and this season has been averaging just a 0.2 rating in the 18-49 demographic with 490,000 viewers. Last week’s episode hit a new series low with just 340,000 viewers. (You can check out the week-by-week ratings.)

For comparison’s sake, the last season of Teen Wolf averaged a 0.7 rating and 1.69 million viewers.

The Inbetweeners, another MTV sitcom, only fell as low as 530,000 viewers and that show was cancelled last week.

So yeah, it looks like Underemployed is doomed to be cancelled. On the positive side, there are five episodes left.

What do you think? Do you think that Underemployed should be cancelled or renewed for a second season? Is it a better show than the ratings indicate?

Hi. I just saw the last episode of the series and it can’t be cancelled because i want see miles on tour eiffel! Whatever, it’s an amazing series because it reproduces faithfully the difficulty that all young people have to overcome: the underemployment. Now in my country there’s this problem and series like this give to young people like me the strong and the hope to continue to look for work. It doesn’t matter if the programme didn’t have many viewers. For those few it’s important and special! I hope that it won’t be cancelled for me and my peers… Read more »

Thanks a lot for canceling Underemployed, a show that I haven’t heard anyone say they didn’t enjoy, a show that had morals and relatable characters… but remaking the trashy Real World / Road Rules / Jersey Shore ******** for the past like 15 years. Thank you MTV for sucking ****.

IT’S NOT TO LATE !
Season 1 is on tv in Germany and its amazing all my friends watch it.
When i was looking the first episode i looked on this night the other 11 episode BECAUSE ITS AN AMAZING SHOW !!!
I would always missed it and i think it would be really nice to see the second SEASON !!!
Please help us to continued the SHOW !!!
I would love it xoxo

Please bring this show back! It is the best show on Tv by far! The date needs to be changed not everyone has a dvr! Luckily I do . This show was amazing it kept me on the edge of my seat every episode unlike your other shows which may be lucky to do this once a season. Lets be honest this is the only good show mtv has tern wolf and all that other stuff is trash to say the least. Except girl code and guy code of course lol but I feel like people on guy code don’t… Read more »

I love the show!please..i need a second season!lau from Italy!

The show was good forget the ratings !

I guess that it depends on the ratings I’m other countries, so I’ll do my part and sit trough every episode twice, once on the internet, once on television. I love this show! It is indeed the best teenage show ever made, right after Gossip Girl, it’s better than The Vampire Diaries and Buffy… I would be really disappointed if this really got canceled…

I really liked this show I would always missed it when it aired but then I would watch it on on demand. This show was a really good show it showed you hOw life could be when ur out of high school and ur unemployed I would hate to see this show go so soon. can they at least have just one more season. That would make me happy and I better sure it will make others happy too. They 5 of them are really good actors and I pretty sure they don’t want the show to go either.

It’s probably to late now. But here in Denmark, the show has just aired and it’s amazing.
I like the story about the 5 friends, and after Gossip Girl, it’s the best teenager show ever been made and the only show after Gossip Girl that catches the teenage problems. Who can not love UNDEREMPLOYED? , such a shame second season doens’t come.