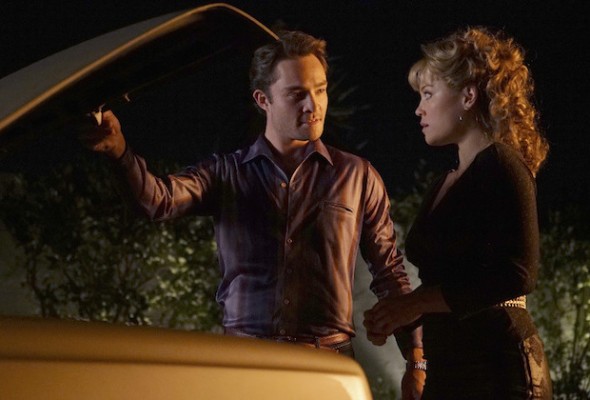 Last week, ABC cancelled Wicked City after three episodes had aired and cut the season episode order down to just eight installments. Though the drama had very poor ratings, the cast and crew are aware that the Tuesday night series did have some devoted fans.

While the cancellation is surely a disappointment to fans of the series, there is some good news. The cast and crew were in the middle of filming the eighth episode and were able to complete their work just yesterday. According to two of the executive producers, Laurie Zaks and Jon Cassar, ABC will be making the remaining five installments available for streaming some time in the future.

Zaks has also indicated that they were able to wrap up the show’s story in the eighth episode “with a great ending.” Here are some of their tweets:

We are finishing the episodes and there will be an ending and somewhere to watch @WickedCityABC https://t.co/7WkA4U65xV

We don't know yet. Abc will have a plan and we will keep you posted https://t.co/YSFYjUkjFI

To #WickedCity fans looking for us tonight. We finished filming 8eps today with a great ending. Suitable 4 streaming. The story is complete

#wickedcity The boards with story ideas being wiped clean in the writers… https://t.co/GlIPdlbBjm

We’ll keep you posted as soon as we know more. You can find other cancelled shows here.

What do you think? Do you plan to watch the remaining episodes of Wicked City online? Do you think you’ll be satisfied with the ending?

Very typical of ABC! Very great show. Every time I get into a show on ABC they cancel. LAST time I watch ABC. And I’m going to make sure everyone I know knows…. Like what the H happens. Now we all have to wait and see what happens. Leaving us hanging. Get a grip abc. Really. Multi billion $ network. While ppl like myself are about to be on the street my heart pumps. At least leave the god damn show on. Please!!!!!!! U suck.

I CAN NOT BELIEVE THIS! I KNEW SOMETHING WAS UP WHEN IT WAS NOT AIRED ON TUESDAY! WHY WOULD YOU PULL SUCH A GOOD SHOW THIS SHOW HAD THE POTENTIAL TO BE GREAT! #FIGHTFORWICKEDCITY #WHO’SWITHME?

We lpved loved this drama. Very very different with great actors,
I turned 10 of my family members and coworkers onto it, They
ALL loved it and are very disappointed. Upset with ABC about this.
I think they should rethink this..

I want to see what happens. Why is it that good shows keep getting the plug and **** shows are still on.

So disappointed!!! No one gave it a chance! I know for fact that at least 5 friends of mine loved the show. This is so typical of television these days. Just like FX keeping the ridiculous show the The strain and canceled The Bridge, which was fantastic. Wicked City had so much potential and really wasn’t given a chance. Great actors and done well…. There is less and less to watch anymore…

Constructive, as requested: when someone decides to cancel a show, they might at least show some respect for their audience and provide a synopsis of the storyline and outline the development of the main characters for those who cared to watch the beginning and happened to like it. My ‘bad taste’ deserves as much attention as anybody else’s.

Once again a really great show with a fascinating, engaging plot line is canceled before it even gets off the ground!! Instead of being some vapid reality show (The Bachelor!) or a mindless comedy (Just Off the Boat!) Wicked City was actually gripping, intelligent and completely different than anything else on primetime TV. Even if the ratings didn’t start out that strong ABC could have at least waited six weeks to give it a fair chance. They did with all the other ridiculous shows they have on now!! I was so excited to see this week’s episode only to go… Read more »

So disappointing I was really getting into the story.. So aggravating

Can’t believe that this show was cancelled. A real disappointment. It was a fantastic crime drama.

This really sucks. I guess I will have to watch the rest wherever the idiots decide to stream it. Very aggravating that they keep cancelling good shows because they don’t like the numbers. Get rid of those dumb reality shows. I guess it’s true – you can’t fix stupid!!

This is completely ridiculous! You didn’t even give it a chance! I happened to like that show and have been wondering why my pvr didn’t record the last episode! Get your act together ABC! I already don’t like your network because you make it difficult for ppl to watch your shows! On Shaw’s VOD I can watch TV episodes I’ve missed….all networks are available except ABC. ABC doesn’t have their network available through Shaw VOD for some reason. I’m very annoyed and disappointed!

I am really disappointed that ABC would cancel this series after only 3 episodes. Could have given it a little more time for those of us that did like it. Take a look at some shows that really need a second looksee….Dr. Ken, Just Off the Boat etc. Please –

Just 3 episodes and they cancel it. Really? It just got started, My wife and I just started watching it and got into it and the idiots cancel the show! Can’t any ABC execs have any brains or taste at all? I hate network television anymore because unless someone big is behind a show it probably has little chance of staying on the air! This show is better than many other shows out there.

I agree. Loved the show. I record it and watch the next night since I do watch Chicago fire outright. Left us all viewers hanging again. Why even bring a new show on the network if gonna cancel anyway. Just sayin.