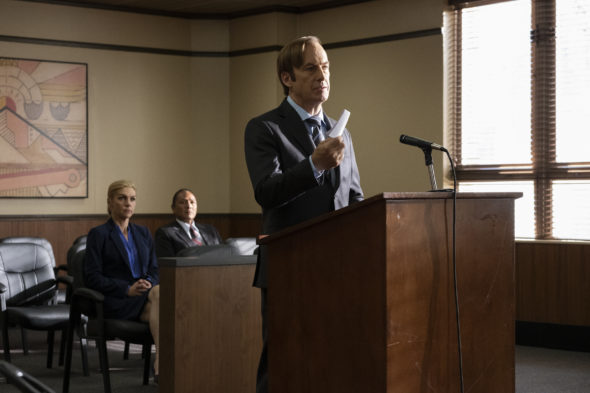 Better Call Saul wrapped its fourth season on AMC last October. Is there more left of the series? Bob Odenkirk spoke about the series and what he’d like to see happen at Emmy Awards, where he was nominated for Outstanding Lead Actor.

It was Extra TV that asked the actor how many seasons are left of the AMC drama, and he spoke honestly. Odenkirk would like to see one more season of Better Call Saul. He doesn’t want the series to go passed the ‘mothership’ of Breaking Bad. That series aired for five seasons on AMC before Walter White ended it all. He thinks the series needs one more season to wrap up the stories on the series, but if the powers that be want more than one season he is okay with that too. He leaves that in their hands.

The story of the Breaking Bad world is not done yet though. El Camino is coming to Netflix on October 11. Fans will also be able to see the film in select theaters.

Check out more of what Odenkirk had to say in the video below.

What do you think? Are you a fan of this series? Do you want one more season of Better Call Saul? Would you take more than one season?

Yes. I Definitely would want to see and watch more SAUL.

I have enjoyed the series but like other shows (example Man in the High Tower) the time between airings of the final season episode and the next season is ridiculous. Either find actors and executives who are willing to commit or just end the show. I’ve really lost interest at this time.

This series would have lasted a long long time but the excuses as well as the length between the 5 seasons has lost interest of fans. Please just end the series and fire the management that ruined a hit series.

I absolutely love Better Call Saul. It has revived the greatest show ever in Breaking Bad. I would watch 100 seasons if they were made. Just sayin’…!

I do not agree with him. This series is some thing different to BB and has ingredients to stand alone and be even a better series but it should be more confident. I think 3 more seasons make it a more important series than what Breaking Bad is but it should be creative and courageous.

I’d love to see as many seasons of Better Call Saul as can be as creatively written as the past four. This writing team is masterful. It is my well protected obsession to stream Better Call Saul then Breaking Bad . . . over amd over again, looking for every easter egg possible. To watch on my iPad is the very best, since the touch of a finger rewinds just enough to answer conundrums! What did we groupies do when we had to wait a week for the next episode?? Egregious!

Yes I Love Better Call Saul & am looking forward to another season & beyond!

YES! I just watched 1 thru 3 on Netflix, and paid for season 4 on Prime video. I love Saul and Kim together. Ending season 4 gave you the sense she would leave him. Let them marry and have a lil Jimmy…he needs a family even if they do not stay together!

Yes, I would like to see more than one more season