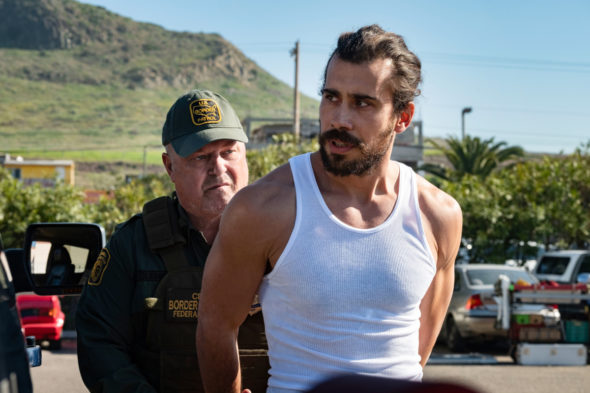 Is Ben in too deep? Has the Coyote TV show been cancelled or renewed for a second season on CBS All Access? The television vulture is watching all the latest cancellation and renewal news, so this page is the place to track the status of Coyote, season two. Bookmark it, or subscribe for the latest updates. Remember, the television vulture is watching your shows. Are you?

Streaming on the CBS All Access subscription service, the Coyote TV show stars Michael Chiklis, Adriana Paz, Kristyan Ferrer, Octavio Pisano, Cynthia Kaye McWilliams and Julio Cedillo with Mark Feuerstein, Kelli Williams, Daniel Mora, Emy Mena, George Pullar, Amy Forsyth, Ross Phillips, Romina D’Ugo, Bobby Daniel Rodriguez, Natalia Cordova-Buckley, Jose Pablo Cantillo and Drew Powell in recurring roles. The series tells the story of Ben Clemens (Chiklis). After 32 years as a border patrol agent, he’s forced to work for the very people he spent his career trying to keep out of America. Exposed to life on the other side of the wall, Ben starts to question his black and white views of the world, challenging his ideology and his loyalties. Other characters include Silvia (Paz), the proprietor of the local taqueria; Chayo (Ferrer), a member of the Cartel and has a very personal ax to grind; Sultan (Pisano), a member of the Cartel and a second generation Mexican American who has fled to Mexico; Holly Vincent (McWilliams), a smart, savvy, and streetwise HSI Agent; Neto (Cedillo), a seasoned, local cop in a small Mexico town.

Unless they decide to publicize viewership, it is difficult to predict whether CBS All Access will cancel or renew Coyote for season two. Since CBS All Access isn’t ad-supported, it can take a chance on series it believes in and stories that need telling, but sooner or later it comes down to production costs, versus viewership numbers. Based on what I’ve seen, I think Coyote will be renewed. I’ll keep my ears open and an eye out for news, and will update this page with breaking developments. Subscribe for free alerts on Coyote cancellation or renewal news.

What do you think? Do you hope the Coyote TV show will be renewed for a second season? How would you feel if CBS All Access cancelled this TV series, instead?