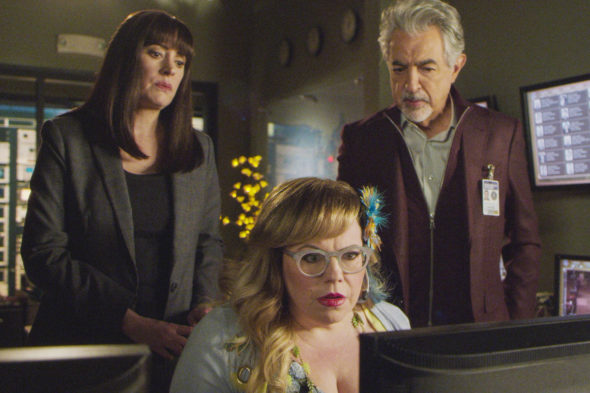 Will there be a satisfying conclusion to the 15th season of the Criminal Minds TV show on CBS? As we all know, the Nielsen ratings typically play a big role in determining whether a TV show like Criminal Minds is cancelled or renewed for season 16 (we already know it’s ending). Unfortunately, most of us do not live in Nielsen households. Because many viewers feel frustration when their viewing habits and opinions aren’t considered, we invite you to rate all of the 15th season episodes of Criminal Minds here.

What do you think? Which season 15 episodes of the Criminal Minds TV series do you rate as wonderful, terrible, or somewhere between? Do you think that Criminal Minds should have been renewed for a 16th season on CBS? Don’t forget to vote, and share your thoughts, below.

Please do not cacel Criminal Minds show.I enjoy it very much

Criminal Minds should continue on to Season 16!!! Screw those dumb rating reviews! It’s one of the best shows on TV ( and there aren’t a whole lot anymore!) Why oh why does CBS cancel the best shows??? Maybe they need some new help!?! They canceled Big Bang and that show was phenomenal! The cast of Criminal Minds is so good; they complement one another so well! You are making a mistake again, CBS! Now the next great show you will probably cancel will be NCIS with Mark Harmon! Pls don’t take away all of the good ones and bring… Read more »

I have never missed a episode. It was sad when Morgan left. Please don’t cancel the good ones!!

I’ve watched every episode of Criminal Minds from the beginning. I would love to see another season.

Wish there would be another season. I have watched from the beginning and love it every time

I think criminal minds is a show worth keeping !!

Criminal Minds is just the best show that keeps you on the edge of your seat at every episode. Please continue making more seasons of my favorite tv show.

They were all great episodes and relatable. I especially liked “The 13th Step.

PLEASE BRING CRIMINAL MINDS BACK!!!!! I LOVE THAT SHOW!!!

I was so glad to see this wasn’t canceled

At least not yet, but I heard somewhere that this is the last season? I hope not though.

I don’t want Criminal Minds to end. They should check out how many fan groups they have and how many are members. They should do the same with S.W.A.T. A lot of great shows get cancelled. The Neilson rating is like the Electoral college. All people/ votes need to be counted.

I agree with all that you said until you got to the part about the Electoral College, In that you are definitely wrong. It is how our Constitution mandates how are Presidents are elected so that the largest states (w/most population) aren’t the only people’s votes who matter. Don’t like it, then you don’t like our Constitution. To equate the two items is just wrong!

I love this show — I will never be the same when it ends.. Good luck — but I believe putting pretties in charge killed the show of Criminal Minds CBS can thank themselves for letting Hotchner go yes he had a fight with the director but Micheal weatherly stalked and raped a woman on his show — y’all paid her off and kept his show on when it stinks—-

This show has made me a believer that there are such criminals out there.
please do not delete this show,

Criminal minds ,Star and Empire were all amazing series and should have NEVER been cancelled!