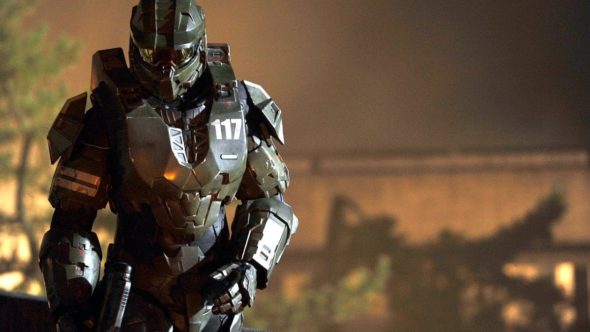 Halo finally has a premiere date. Paramount+ has released a trailer for the new sci-fi series which is based on the popular Xbox video game franchise. The series will arrive on March 24th. Starring Pablo Schreiber, Natascha McElhone, Charlie Murphy, Jen Taylor, Shabana Azmi, Bokeem Woodbine, Kate Kennedy, Natasha Culzac, and Bentley Calu, the series is set in the future with humanity battling an alien threat.

“During the Kansas City Chiefs vs. Cincinnati Bengals AFC Championship Game, Paramount+ revealed the official trailer for HALO, the service’s highly anticipated upcoming original series based on the iconic Xbox franchise. HALO will launch on Paramount+ in the U.S. and in all international markets where the streaming service will be available on Thursday, Mar. 24.

Halo reinvented how people think about video games and has grown into a global entertainment phenomenon, having sold more than 82 million copies worldwide and grossing more than $6 billion in lifetime total sales revenue.

HALO is produced by SHOWTIME(R) in partnership with 343 Industries, along with Amblin Television. HALO is executive produced by Steven Kane, alongside Steven Spielberg, Darryl Frank and Justin Falvey for Amblin Television in partnership with 343 Industries, director Otto Bathurst and Toby Leslie for One Big Picture, and Kyle Killen and Scott Pennington for Chapter Eleven. Kiki Wolfkill, Frank O’Connor and Bonnie Ross serve as executive producers for 343 Industries. The series is distributed internationally by ViacomCBS Global Distribution Group.”

Check out the trailer for the premiere of Halo below.

What do you think? Are you excited to see Halo on Paramount+?