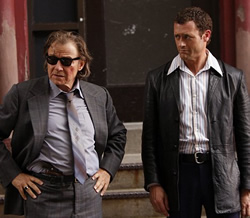 LOM was a great show!! time slot and delay continuation doomed this series….. PLEASE some other network pick it up ….from b 4 the finale and show them how it’s done.

The UK series was brilliant, and probably one of my favorite tv series ever. I was completely taken aback when I heard of the remake, even if it had Harvey Keitel.
Watch the British series. It is fantastic and will blow your mind.

Great show. Name of show may have kept viewers away as it sounded like a si fi with space travel. Great acting, music and historical content. i wish the network could have given it a chance. Remember Seinfield didn’t do well the first year.

Some say, the keepers of American foolishness, by knee-jerk reaction, felt the series was to “deep” for American grazers to understand.
I hope these fools are wrong.

This is typical of ABC recently; good shows that the execs think are not doing well based on a time horizon that does not include how many people use TIVO or watch the shows online. Hey ABC, America has a life and we are not glued to our TVs, we enjoy watching shows without the commercials!!!!! No wait, I guess we can’t enjoy watching them becasue they are cancelled so you can put crap like dirty sexy money on, later to be cancelled because it was really crap……………..

The US remake was a terrible, terrible piece of television. I’ve seen a lot of GREAT US shows getting canceled (Studio 60 on the Sunset Strip, for example) but LoM US really deserved it. I can only tell people to import the UK version, it’s simply brilliant, even if you’re not british (I’m german, I live in Germany).

They should have stuck with the original ending from the BBC series. I actually found the US version very entertaining except all the god/heaven/hell stuff and the miserable ending.

My wife,and I followed this series from episode 1 ,until the finale.We’re very disappoi-
nted about ABC’s cancellation of “Life on Mars,”.This series required an imagination to
write,act,and watch.Broadcast executives lack these qualities immensly,their only con-
cern is to stuff our program listing with mindless reality shows,this must be their reality

How stupid are you people! Did you work for COKE back when they felt it should taste different? Some corp. lessons are never learned. But keep patting yourself on the back and, oh hey maybe you could have yet another show on dancing… Call it, dancing with executive numbskulls.

I don’t mind the idea of a good show being canceled if the finale draws some kind of real closure. The ending made no sense. All through the show, we were led to believe that he was in a coma caused by being hit by a car. He constantly has glimpses of the world he is trying to get back to and is even being contacted with clues by some one or some thing that he believes will help him get back. A very thick plot ends like a balloon being popped. I mean, come on. We are supposed to… Read more »

I am sick of becoming involved in a tv series, only to have it cancelled. What has tv become? I loved this show. I also loved Men in Trees & looked forward to it every week, then it got cancelled. It does It seems like there is so much crap on tv now, with all of the stupid reality shows. It makes me not want to watch any tv series anymore. I get to know the characters pretty well, and then it’s like they all die off.

I want to know if Network exc. actually have eyes or ears! Can’t they see an amazing show like “LIFE ON MARS” and can’t they hear we want it back, NOW!

what’s up with you network exc at ABC, you take away some of the past shows out there like Mars and Elli Stone….

I truly look forward to both shows and now nothing……this season sucks, you hear me, IT SUCKS, if you could see me, you’d see what finger gestures I was using too!
BRING BACK MARS & ELLI!

I’ve been waiting for the premier of Life on Mars and Eli Stone the past month, never occurred to me that these two great shows would have been cancelled. Am ticked off; those ridiculous “reality” shows are the one that should be axed.

What a complete dissappointment ABC. at least try to sell the show to another tv agency or something. I hate reality shows for the most part and don’t watch much tv, but Life on Mars was one shoe I never skipped a beat on.

Please, Fox, FX, CBS or some other major tv station pick up this very fine show. Such a lost for good tv.