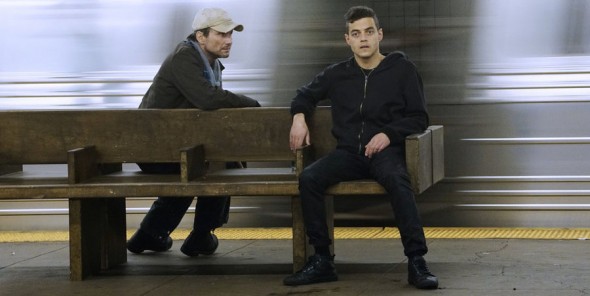 TV show description:
This psychological thriller TV series follows a young programmer who finds himself at a crossroads when the mysterious leader of an underground hacker group recruits him to destroy the firm he is paid to protect.

As a senior network technician for cybersecurity firm Allsafe, Elliot Alderson (Rami Malek) protects corporate clients — including the ubiquitous Evil Corp — from security breaches and data theft. As a vigilante hacker, he monitors the people in his daily life and protects those he’s close to from their own flaws, sometimes with unpredictable results.

Originally from Washington Township, New Jersey, Elliot now lives alone on the Lower East Side. He suffers from crippling anxiety, which stems from memories of his difficult childhood. His father died when Elliot was young, and his now-estranged mother was brutally cruel. Elliot has spent most of his adult life isolated from the world around him.

After being arrested for financial hacking, he has been attending court-ordered therapy for almost a year — talking to therapist Krista Gordon (Gloria Reuben). Elliot, however, prefers self-medication by morphine, an addiction he mediates with suboxone. He obtains both from his next-door neighbor, Shayla.

With the arrival of Mr. Robot (Christian Slater), Elliot’s world changes entirely. The mysterious figure approaches Elliot with the opportunity to contribute to a worldwide revolution. Mr. Robot has a murky history but he has huge plans for the future. He recruits the members of fsociety to come together at an abandoned arcade — and is relentless in his leadership of the team. Fsociety’s members and mission offer Elliot a renewed purpose — though accompanied by a risk of heightened paranoia.

Darlene (Carly Chaikin) is a malware coder whose skills are fundamental to fsociety’s master plan. Though biting and jaded, she becomes Elliot’s confidante. He relies on her resilience and creativity for quick problem solving and fast hacks. She is an excellent lock picker, a crass jokester, and a jobless transient. She obtains money from hacking ATMs.

At Allsafe, Elliot works with Angela Moss (Portia Doubleday), an account executive and his childhood friend. She is ambitious but lacks confidence, savvy but lacking technological skills. She relies on Elliot for assistance in critical situations — in both business and her personal life. Angela’s mother died when she was young, from cancer which developed after her exposure to toxic chemicals at a factory owned by Evil Corp. She has a strong relationship with her father, Don, though events at Allsafe begin to strain their relationship.

After a hacking scandal, Tyrell Wellick (Martin Wallström) was appointed Interim Chief Technology Officer at Evil Corp. The job is a position he intends to make permanent, no matter who he has to impress or suppress to achieve this goal.

His partner in social climbing and career mobility is his wife, Joanna, who goads him to more aggressive action and darker schemes. While Tyrell depends on their partnership, he also struggles to find his own path. When his interest in Elliot collides with his professional mission, Tyrell must choose whether to follow Joanna’s plan or take matters into his own hands.

What do you think? Do you like the Mr. Robot TV show? Do you think it should have ended or been renewed for a fifth season?

Love Mr.Robot. Thought Rami responded at times like a robot. I’m so happy to have a series where one has to pay attention and think. One can feel the pain and anxiety of the characters. Well written ,and thought out. Hope series continues for a long time

Love the show.Tami at times seems like a robot. There is alot going on, that is one of the reasons I enjoy the show. For once a series where one has to pay attention. Hope the series isn’t cancelled

This is my new favorite show. The music and camera angles alone are creative and original. and worth the watch. The plot is complex and cryptic; more than enough to hold our interest. Taking down the world’s most “Evil Corporation” gives the series some continuity and a sense of urgency, but it is just the framework on which all these wonderful characters are displayed by brilliant actors and actresses, no two of whom are alike. Elliot is unique in the history of protagonists. Yet we can instantly identify with him and understand all, thanks to his piercing soliloquies. Carly Chaikin’s… Read more »

Yes, it depicts some dark or unpleasant subjects, but realize, that is part of life in the U.S. The show offers a breath of fresh air in that finally we are getting a view of Wall St. and capitalism in modern, corporate sponsored American. Keep up the good work! I vote to keep this excellent show on the air.

I have no idea what’s happening with this show. It started off so promising. It was easy to see that Christian Slater’s character was just a figment of the imagination created by the main character’s troubled mind. THAT would have been a great angle. But now it’s not that, and it’s not anything that makes any kind of sense. There’s too much going on that has nothing to do with the storyline so half the time you’re bored and half the time you’re confused. Hate to see another Christian Slater show go down the tubes but this one needs to… Read more »

I hope and pray that piece of **** is taken off the air ASAP. It glorifies all things that are wrong with this world and it should not be on the air

I have been watching mr. Robot. Please do not cancel the show. Thank you

Generally speaking most television shows are either boring / lame with subpar acting but well written or so over the top outrageous with action & effects that I don’t watch. This show is different. Mr.Robot has an understandable subject with interesting characters. It touches on subjects such as substance abuse, homosexuality, family problems,emotions etc. Subjects usually altogether avoided. Please keep it real and edgy, it will keep its integrity & broaden perceptions as much as can be exoected for TV shows

I’ve been a fan of USA programming for years. One particular is Suits – well written, great acting. Quality show. I started watching Robot several weeks ago and thought it had potential. The Wednesday night July 8th show was huge disappointment with the “in your face” display of sexual behavior including sodomy. So much for good scripting and acting. Guess its easier to get ratings with cheap tricks.

I hope to hell the folks at #USA wake up and realize what a treasure they have in Mr.Robot. Great acting AND script writing. No way should this fine show be on a bubble. Give us more shows of this quality. We need to wake up to the monster Wall St has become!

I agree 100% – this show is a gem, well-acted AND well written. I hope the public finds it and they can keep up the quality. There aren’t too many shows out there of this quality. Another one the public doesn’t know about is RECTIFY on Sundance.

I think it’s possible the best TV series, I’ve ever seen. It’s original, current, and kinda scary. I think Rami is the best young man for the part. He brings realism to the role of Elliott. His awkwardness with people, and his social limits are so real it’s almost tangible. You can tell Rami’s researched the social/mental disorders thourghly. I look forward to seeing how Christian Slater’s role,and the whole show plays out

Don’t cancel the show it’s a good show some what out there, possible to deep for some folks. Sick & tired of canceling good shows & leaving the idiot ones on preferably the reality shows totally stupid, dump, empty, full full of nonsense back stabbing garbage ugh.

I have recorded the first episode of this showw . I am looking forward to liking the show …

Mr. Robot’s first episode was excellent. I only fear that they will lose a lot of potential audience because of the title. I was NOT interested to see a show that I thought was about robots. The promo grabbed me; but I think the title was a mistake. Hopefully, I’m wrong about that – as Breaking Bad (the greatest TV show EVER) didn’t have a great title; at first, either. PASS THE WORD AROUND IF YOU LIKED IT, so we don’t lose it.

I can’t stand looking at Rami Malek, but Christian Slater’s got my vote. He can’t seem to get a break lately. I’ll give it a shot and see if it works.

I didn’t enjoy Rami’s look either, but “who he is” in the show, changed that – just like what happens in real life, when you get to know (and like) a person.

G Turnbull (if you come back to this site) – get past Rami’s look – the show is excellent! NOBODY can say otherwise, it’s just not possible.