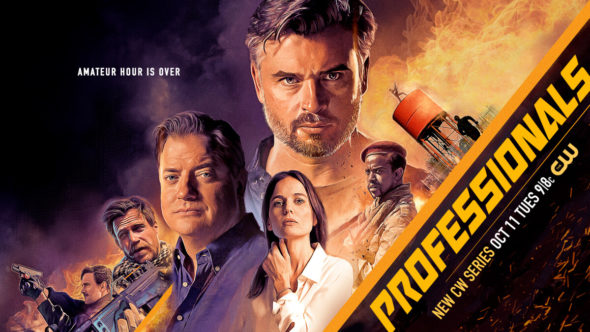 The Professionals series is an international production that was filmed overseas back in 2020 and was released in various countries over a year ago. Since the drama was produced that long ago, a second season doesn’t seem very likely.  But, could positive ratings on The CW improve Professionals’ chances of being renewed? Stay tuned.

11/30 update: You can see the latest night’s ratings in context.

What do you think? Do you like the Professionals TV series on The CW? Should it be cancelled or renewed for a second season?

Kinda like this show now. Fraser and Wellings are solid . The plots are better so are the characters

I always give a Kristin Kruek or Tom Welling show a chance. But the pilot was very boring.

Just watched episode 2 and it was better. Really established the series and Tom Wellings team role.

Was Brendan Frasier given the stage direction: “make your character as annoying and obnoxious as you can”? If so, he succeeded.
The rest of this? Not too shabby at all. I’ll watch ep #2.