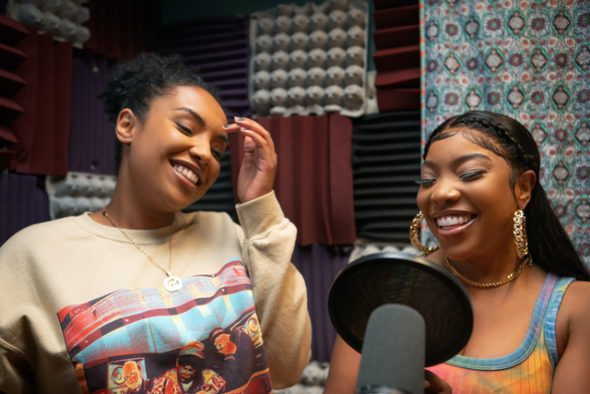 Estranged friends reunite to make music together. Has the Rap Sh!t TV show been cancelled or renewed for a second season on HBO Max? The television vulture is watching all the latest cancellation and renewal news, so this page is the place to track the status of Rap Sh!t, season two. Bookmark it, or subscribe for the latest updates. Remember, the television vulture is watching your shows. Are you?

Streaming on the HBO Max subscription service, the Rap Sh!t TV show was created by Issa Rae. It stars Aida Osman, KaMillion, Jonica Booth, Devon Terrell and RJ Cyler. Recurring players include Ashlei Sharpe Chestnut, Daniel Augustin, Amandla Jahava, Jaboukie Young-White, Brittney Jefferson, and DomiNque Perry. A college dropout and a struggling rapper, Shawna (Osman) works at a Miami hotel as a concierge and feels stuck in her life. She’s surprised to receive a call out of the blue from an old friend named Mia (KaMillion). Mia’s the single mother of a four-year-old girl and a rapper who works multiple jobs to support herself. She asks Shawna if she can watch her daughter while Mia does a client’s makeup. The girl’s dad, Lamont (Cyler), has flaked. Shawna agrees and this rekindles their friendship. They go out drinking afterward and have a heart-to-heart talk on Instagram Live. Their song goes viral so Mia proposes they start a rap group together.

Unless they decide to publicize viewership, it is difficult to predict whether HBO Max will cancel or renew Rap Sh!t for season two. Since HBO Max isn’t ad-supported, it can take a chance on series it believes in and stories that need telling, but sooner or later it comes down to production costs, versus viewership numbers. Generally speaking, HBO Max TV shows which are going to be renewed are usually picked up within a month or so of the series or season premiere. I’ll keep my ears open and an eye out for news, and will update this page with breaking developments. Subscribe for free alerts on Rap Sh!t cancellation or renewal news.

What do you think? Do you hope that the Rap Sh!t TV show will be renewed for a second season? How would you feel if HBO Max cancelled this TV series, instead?