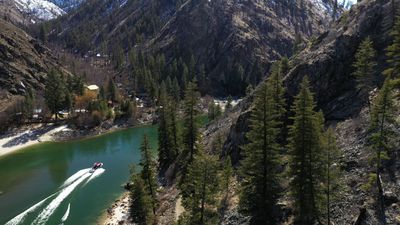 River of No Return is a new brand Discovery series coming to the network. The series will premiere on October 6, and it introduces viewers to the homesteaders, pilots and boat captains that live in the Frank Church Wilderness. The area, called “The Frank,” is not easy to get to at all, and the series plans to show just how hard life in that region of Idaho is for people.

Discovery Channel revealed more about the new series in a press statement. Check that out below:

“Set deep in the backcountry of one of the largest, most dangerous and incredibly scenic stretches of unfettered land in the country, lies the Frank Church Wilderness, also known as “The Frank.” The only direct way to access this rugged region of Idaho is a daring flight through steep canyons on a bush plane or a harrowing jet boat journey through Class 5 whitewater rapids on the Salmon River, also known as “The River of No Return.” Within the 2.3 million acres of secluded wilderness lives a small community dependent on the pilots, boat captains and each other to survive.

In all new Discovery Channel series, RIVER OF NO RETURN, audiences are introduced to this tight-knit community of homesteaders who rely on themselves, the help of their neighbors and a seasoned set of survival skills to endure challenging and isolating winters in order to remobilize their extraordinary lives in the stunning, remote wilderness come spring. RIVER OF NO RETURN premieres Sunday, October 6 at 9pm ET / PT on Discovery Channel. In addition to watching the series on Discovery, viewers can check out new episodes each week by downloading the Discovery GO app. Viewers can join the conversation on social media by using the hashtag #RiverOfNoReturn, and follow Discovery on Facebook and Twitter for the latest updates.

In the Frank Church Wilderness, those who occupy the land must abide by a strict code of conduct: no motors outside of your property, respect thy neighbor, and leave no trace. The only means of transport and accessing supplies are by way of the largest un-dammed river in North America, the Salmon River, commonly referred to as “The River of No Return.” The river is so challenging to navigate it was once described by Lewis and Clark as “foaming and roaring through rocks in every direction, so as to render the passage of anything impossible.”

Under these circumstances, the residents of “The Frank” tackle everyday life in one of America’s last frontiers where they face the many tests Mother Nature throws in their direction; navigate the ordinary domestic challenges of home and family-life; and forge unbreakable bonds with those who share in their unique lifestyle. Within this remarkable confluence of old-world tradition and modern-day reality, RIVER OF NO RETURN spotlights how these homesteaders – from twenty-somethings seeking to test their limits, to the living legends of the River who have chosen to spend their lives “back there” – live life on their own terms.

Discovery also revealed a short preview for the series.

What do you think? Will you check out River of No Return on Discovery next month?

After seeing the jerk that hit a mule with a hammer while putting on shoes, disturbed my family so much, that we will boycott this show, even though we love these types of shows. And will no longer be watching this show. If I saw him do this face to face, I would club him with the hammer. He doesn’t deserve to have these animals. Peta needs to take all of his animals, and not allow him to have any animal again. I bet anything that this was not the first time he has done this. SHAME !!!

I am also done watching the show after Ron hits a horse with a hammer (first 10 minutes of episode 4). DISGUSTING!! Real ranchers/horsemen respect and take pride in their animals. They don’t beat them with hammers. Karma is real and hopefully it will put a horseshoe between the eyes for old Ron.

Please notify the aspca, peta, and Idaho Horse Rescue,..i already have..and Discovery channel if you get a good number or email address..please post that info here, i have not been able to sleep or relax since i witnessed that malicious abuse

All done with your show after man hit horse with hammer!!!

That man is Ron Ens…please report this

Yes we are so looking forward to watching River of No Return we have heard quite a bit about the legend Ron Ens.

He hit his horse with a hammer.. They shouldn’t have people like that on their shows.

Please report this to PETA, I already have and the aspca, and Idaho Horse Rescue

He hit his horse with a frickin sledge hammer on the horses side area..looks like hes been in the wilderness too long..malicious

Do you know what a sledge hammer is???

I think discovery did a good job on the show, I’m going to continue to watch I hope they have a season 2. As for the horse, I would like to see everyone of you shoe a horse. My guess is you wouldn’t get the job done. Discovery great job on the show keep it up. As for the haters book a trip and go experience it

Either way, how PO’ed you get or not. Animal abuse isn’t the answer. I’ll agree it’s a good show and Yes I’m a rancher and know how tough it is, but I’ve never had to hit an animal to get a result. PERIOD!