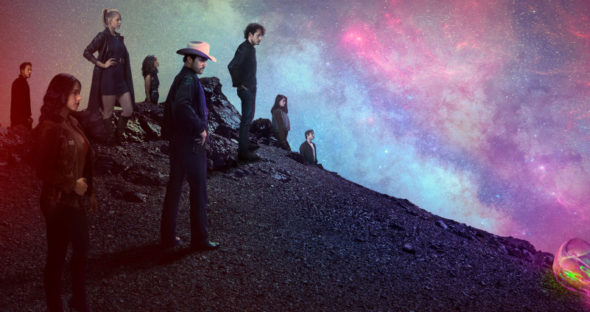 The Roswell, New Mexico TV show is one of those rare TV series that was cancelled before its newest season even debuted. While it appears that this CW show’s fate has been sealed, could a fifth season renewal be possible if the ratings for season four are good enough?  Stay tuned.

A sci-fi drama series, the Roswell, New Mexico TV show stars Jeanine Mason, Nathan Dean, Michael Vlamis, Lily Cowles, Tyler Blackburn, Heather Hemmens, Michael Trevino, and Amber Midthunder. Based on the Roswell High book series (which was also the basis for a 1999 TV series), this series centers on Liz Ortecho (Mason), who returns to town after a decade away. After reconnecting with her old crush, Roswell PD Officer Max Evans (Parsons), she learns that he, his sister Isobel (Cowles), and their friend Michael (Vlamis), are aliens. In season four, a new threat is emerging down in Careyes, Mexico when a naked alien is brought to an American scientist (Shiri Appleby) in a nearby cantina. As this mysterious new alien is set on a collision course with our heroes, they discover that Mr. Jones might be gone, but his vile plan for two worlds might just live on.

6/28 update: You can see the latest night’s ratings in context.

What do you think? Do you like the Roswell, New Mexico TV series on The CW? Should it have been cancelled or renewed for a fifth season?

This show banked heavily on the popularity of the first show by giving its characters the same names while at the same time trying to claim to be something completely new. It failed at both delivering characters that no-one wanted to see and a story written by people that seem to be lacking a brain. I am so glad I entertained myself by rewriting the original show for better developed characters and a much better story. These days if you want entertainment you have to write it yourself.

Less than a half a million viewers and a .05 in the key demo. This show should have been cancelled before the first episode of the first season. I wrote a better Roswell show than this. Actually, I write better stories than anything on the CW without even trying. Maybe they would like to get some writers that have read and understood great literature and appreciate the art of good storytelling. Everything on the CW is just one large raging dumpster fire.