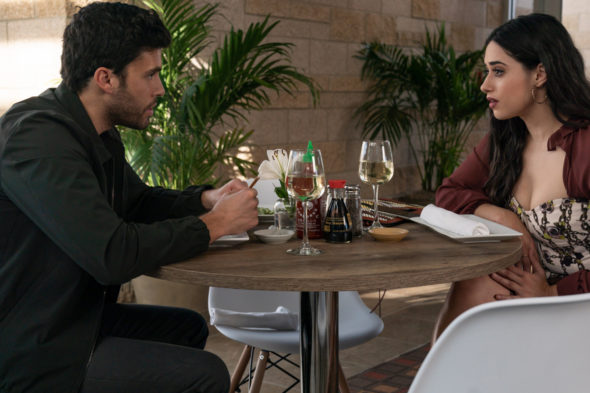 Who is the mysterious stranger? Has the Roswell, New Mexico TV show been cancelled or renewed for a fourth season on The CW? The television vulture is watching all the latest cancellation and renewal news, so this page is the place to track the status of Roswell, New Mexico, season four. Bookmark it, or subscribe for the latest updates. Remember, the television vulture is watching your shows. Are you?

Airing on The CW television network, Roswell, New Mexico stars Jeanine Mason, Nathan Parsons, Michael Vlamis, Lily Cowles, Tyler Blackburn, Heather Hemmens, and Michael Trevino. Based on the Roswell High book series (which was also the basis for a 1999 TV series), this series centers on Liz Ortecho (Mason), who returns to town after a decade away. After reconnecting with her old crush, Roswell PD Officer Max Evans (Parsons), she learns that he, his sister Isobel (Cowles), and their friend Michael (Vlamis), are aliens. In season three, after Max has come face to face with an alien that looks like him, he and his alien siblings try to uncover who this mysterious figure is. Meanwhile, Liz lives out her dream job, high paid, and changing the world at a California lab. A series of events prove that the one-time lover’s connection might not be severed for good. Alex Manes (Blackburn) finds himself in the crosshairs of a new clandestine organization and Michael, Isobel, and Rosa (Midthunder) all begin exhibiting new powers. Confusing things even further is an eerie glimpse Maria (Hemmens) gets of the future in which someone they love will die.

The third season of Roswell, New Mexico averaged a 0.08 rating in the 18-49 demographic and 549,000 viewers in the live+same day ratings (includes all DVR playback through 3:00 AM). Compared to season two, that’s down by 38% in the demo and down by 19% in viewership. While these numbers don’t include further delayed or streaming viewing, they are a very good indicator of how a show is performing, especially when compared to others on the same channel. Other economic factors are involved in a show’s fate, but the higher-rated series are usually renewed and the lower-rated ones are cancelled. Find out how Roswell, New Mexico stacks up against other CW TV shows.

We don’t have to worry about Roswell, New Mexico being cancelled right now since it’s already been renewed for a fourth season. I’ll update this page with breaking developments. Subscribe for free alerts on Roswell, New Mexico cancellation or renewal news.

What do you think? Are you glad that the Roswell, New Mexico TV show has been renewed for a fourth season? How would you feel if The CW had cancelled this TV series, instead?

Roswell,New Mexico is one of my favorite shows!”Here’s hoping it goes for more seasons.

I simply love this show ever since it came out on the CW every episode keeps you glued to your seats.”

I would boycott CW if they ever cancel Roswell, NM!!

Great Show, needs more episodes in every season. Jeanine Mason is an amazing actor. I hope we get many more seasons. Thank You