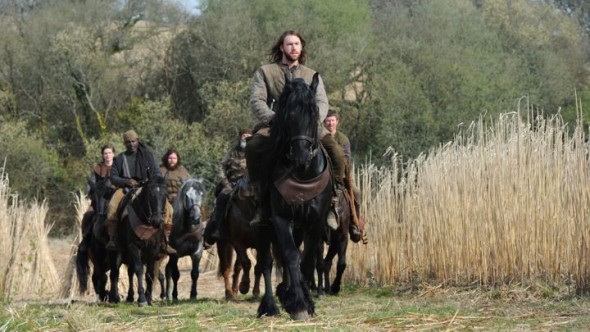 TV show description:
This TV series is a gritty and bloodthirsty medieval drama set in 14th century Wales during a time of English rule. Creator Kurt Sutter draws heavily from history. With the country suffering from the legacy of the black death and the Crusades, daily life is a ritual of violence and poverty.

The ruthless and ambitious Milus Corbett (Stephen Moyer) is a courtier appointed by the crown to govern the region. Mercilessly taxing the communities as he seeks to gain favor, he employs Baron Ventris (Brian F. O’Byrne) to terrorize as he sees fit.

Central character Wilkin Brattle (Lee Jones) was a Knight during King Edward the First’s reign, where the monarch battled successfully against a French and Scottish alliance. Brattle is a deeply spiritual man; drawing on his religious beliefs he wants only to settle down with Petra (Elen Rhys) and live the peaceful life of a farmer. He vows not to take up his sword again.

Leaving the horrors of the battlefield behind proves fruitless as violence catches up with him once more. Annora of the Alders (Katy Sagal) a mystic healer, assumed by some to be a witch, guides Brattle on his brutal journey of redemption.

Series Finale:
Episode #10 — Blood and Quiescence / Crau a Chwsg
Wilkin and Milus lead an unlikely band of brothers on a life-threatening rescue mission.
First aired: November 17, 2015.
What do you think? Do you like The Bastard Executioner TV show? Do you think it should have been cancelled or renewed for a second season?

Aren’t these the same idiots that cancelled Firefly, Harsh Realm and Profit? The History Channel named Firefly the best sci-fi series ever. Pity these programs have to end up on Fox.

You said it, I agree wholeheartedly

It was too good to stay on. The powers that be don’t know how to cross sell their programs and have no taste to begin with.

I will miss this show, however now I can imagine my own plot going forward. I have studied and even lived in that area. The show was very realistic and pretty darn accurate historically. There are some very good books that could have been and may have been used to reference times. If you dare read, try a trilogy by Sharon K Penman, The 1st book is. “Here Be Dragons.” This takes place in Wales and England at this same time. I would love to see some of her work turned into a series with the realism of “*******”

I CAN NOT believe they cancelled this show! I just learned it has been cancelled. I loved this show and was looking forward to the new season. Please bring it back!

Loved this show. At least, since it was cancelled, it ended with an extremely good episode! Everyone expected it to be “Game of Thrones” due to the popularity of that series, but this one was so much better in the little time that it got.

I am saddened by the cancellation of this show. I thought it was excellent in it’s writing and historical accuracy. I think it got cancelled because it was to smart. It did not appeal to the typical American audience who will watch anything the networks will put out. This series did not dumb itself down, and that what contributed to it’s cancellation. So sad and sorry to see it go.

I loved this series. Sad to see it go… Most of the good series get cancelled too soon.

I too loved this series, bring it back at least for one more season!
There is too much story here to be told.

I really am intrigued by the premise of the show and am astonished that it’s already been canceled! I really enjoyed the show and it breaks my heart to take it off of my series manager on DirecTV. Please give us at least one more season to wrap things up? Thank you

This show was horrible. Whoever came up with the plot should never be allowed to write again. By the fourth episode, whichever episode had the “protagonist” going along with chopping off a little girls ear to keep his guise up as the executioner, the show just became absurd, so much so that you couldn’t bring yourself to just go with it.

This show was awful. Horrible plot.

I thought this was a great series. Was looking forward to the next seaon. Why was it cancelled? I thought it was original and interesting.

I really enjoyed this series. Was looking forward to the next season. Now I’m sad

This was one of the few tv series I enjoyed watching. I’m very disappointed it was cancelled.